The couple, who just touched down in the glamorous south of France, looked more in love than ever on an outing with their baby girl!

Hot off their epic vacation in Italy, Kylie Jenner, 22, Travis Scott, 28, and their daughter Stormi have arrived in Antibes, France! Kylie and Travis may not be married (yet) but they’re certainly flaunting their swoon-worthy romance on the glamorous European getaway! The couple was spotted in the ultra-ritzy French town walking hand-in-hand with their absolutely adorable baby girl — who is now 18-months — on Wednesday, August 14.

Kylie and Travis lovingly looked down at little Stormi, as they walked together along the dock and into town for a lunch date. The couple were also seen gazing and smiling at each other, giving us all the romantic feels! The trio arrived to the French mainland by boat, and were joined by the rest of their party including Kris Jenner, Scott Disick and Sofia Richie as they headed to the iconic Hotel Du Cap Eden Roc. The hotel is well-known to be a celebrity and VIP hotspot, particularly during the glam Cannes Film Festival.

Stormi has been popping up in photos on Kylie’s social media, often stealing the show. The sweet baby been echoing her mama’s glam style on the picturesque trip. This sun-filled outing was no exception, as Stormi rocked a pretty blush flare dress and sandals, perfect for the mid-to-high 80s weather. Stormi seemed to be loving the adventure, firmly holding hands with mom and dad as she confidently looked ahead. 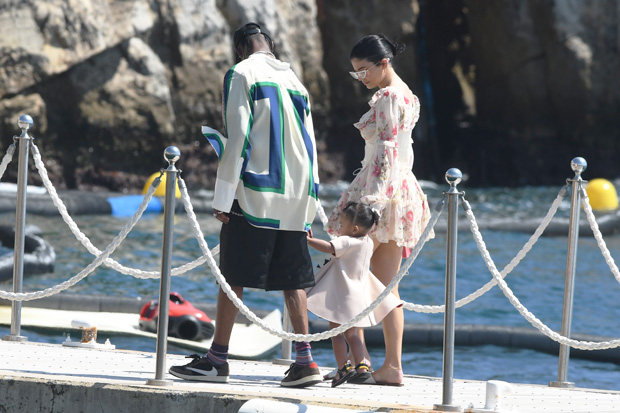 Mom Kylie looked summer chic in a gorgeous white long-sleeve mini dress with pink floral details and a suggestive white bustier over top by Zimmerman. The makeup mogul finished off her look with a smart pair of white slides and trendy pearl sunglasses by Gucci. Both baby and mama wore their hair in fashionable buns for the casual stroll. Proud dad Travis also looked vacation-ready in a white jacket with green-and-blue detail, black shorts and comfortable Nike sneakers.

The family is on the ritzy trip, as we reported, for Kylie’s 22nd birthday celebration which took place on Saturday, August 10. There’s no word on how long the group’s European adventure will last, or other spots they’re planning to visit, but we hope there’s plenty of additional pics on the way!