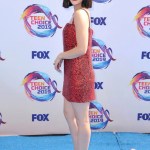 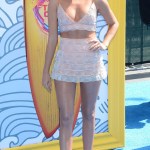 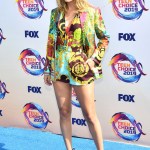 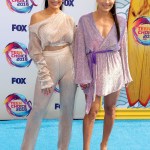 Taylor Swift rocked a bright ensemble at the Teen Choice Awards, accepted the Icon Award & made an exciting announcement!

We can’t calm down over Taylor Swift’s Teen Choice Awards look! The singer stunned on the red carpet in a paisley-printed outfit over a variety of colors. Going along with the rainbow-themed aesthetic, Taylor’s outfit included teal, light pink, lime green and more colors featured on her shorts, top and blazer. Her blonde locks were styled full of volume and she wore light pink eyeshadow to match her look. We’re loving it!

Later in the show, soccer star Alex Morgan gave a moving speech to introduce Taylor Swift and present her the first-ever Icon Award. Taylor was all smiles when she was given her Teen Choice Award surf board that featured her three cats! “I’m having a proud mom moment!” she gushed on stage. Taylor went on to thank Alex, who stunned in an orange sparkling dress, and also called her and her fellow US Women’s soccer teammates “heroes” for their stance on gender equality. She also excitingly revealed that she will be releasing her new single “Lover” on Friday, Aug. 16!

Taylor may be nursing a gnarly hangover, but she definitely doesn’t look like it! The singer was trending on Twitter today with the hashtag #DrunkTaylor after pictures and videos of her surfaced dancing to her own song at a party. Taylor hosted a party at Beauty & Essex in LA to celebrate her continued music success and 10 VMA noms, with guests including including Orange Is the New Black‘s Laverne Cox, Hayley Kiyoko, and RuPaul’s Drag Race season 11 contestant A’keria Davenport. A’keria posted footage from the party to Instagram, which quickly went viral with memes of “Drunk Taylor!”

In the video, the “You Need To Calm Down” singer pretends to take shots while singing her lyric “But you’re takin’ shots at me like it’s Patrón,” and then messes up her hair and plops down on the couch. She stayed on-brand with her look, rocking a long-sleeve rainbow dress.

She has so much to celebrate, especially as Taylor is just two weeks away from the release of her new album Lover. The singer has already had major success with three singles from the record, the latest being “The Archer.” We can’t wait to hear the full album!