Kylie Jenner, Travis Scott and daughter Stormi Webster, are enjoying some family time in Italy ahead of her 22nd birthday on August 10. The couple was spotted getting cozy on Wednesday while heading to dinner on a yacht in Positano, a village on southern Italy’s Amalfi Coast. The two were joined by Kris Jenner and her boyfriend Corey Gamble, along with Kylie’s best friend, Anastasia Karanikolaou. Scott Disick and girlfriend Sofia Richie (not pictured below) are also present on the trip.

Kylie, 21, and Travis, 28, were pictured sitting down together with a cement wall behind them. The Kylie Cosmetics CEO sported her long black hair and a pair of glasses, along with a double diamond necklace. She bared some cleavage in a thin-strapped black top. Meanwhile, Travis, who can be seen sitting behind her, wore a multi-colored button-up shirt.

Kylie and crew boarded a private jet to Italy for her lavish birthday getaway on August 6. A paparazzi photo caught the billionaire Jenner heading onto the plane, along with a white feathered dress, which sparked wedding speculation. Could Kylie and Travis be planning an Italian wedding just like her big sister Kim Kardashian? Kim married husband Kanye West in Florence on May 24, 2014. 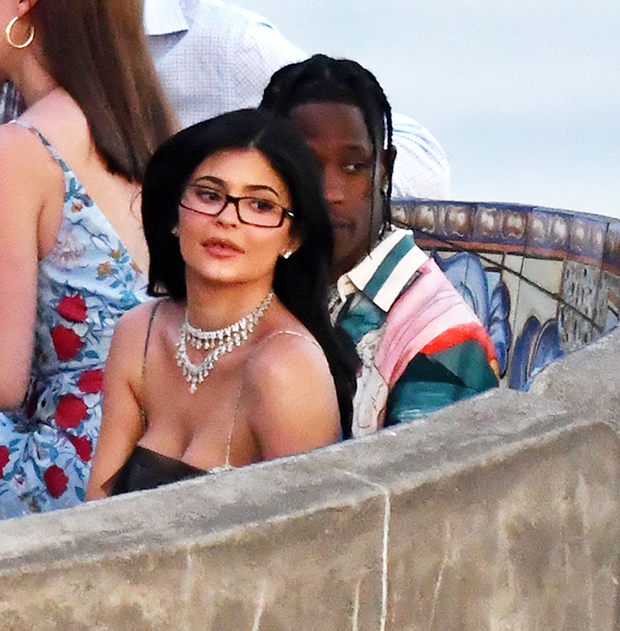 While it’s unclear if the Italian vacation is a way to get secretly hitched, it’s extremely unlikely that Kylie and Travis will say “I do” this week. The makeup mogul herself has previously said she will not keep her future wedding and engagement a secret.

“I’ll let everybody know,” Kylie told Paper magazine of a future proposal during an interview in February. In the meantime, Kylie, Travis and the rest of the group will be partying it up on their luxurious yacht in Italy.