There were so many moving parts that went into creating the reboot of BH90210, Jennie Garth and Tori Spelling told HollywoodLife, EXCLUSIVELY ahead of a special screening of the show at 92Y in New York on August 5. The actresses are the ones responsible for coming up with the reboot idea. BH90210, which premieres August 7 at 9/8c on FOX, will pay special tribute to the late Luke Perry, Jennie and Tori said. Perry played bad boy, Dylan McKay in the original 1990s series, Beverly Hills, 90210.

They went on to explain how the reboot will honor Luke in different and unique ways throughout its multi-episode run. “It was incredibly difficult for everyone across the board,” Jennie admitted of the cast when they first began tussling with ideas of how to honor Perry. “Just finding the right way to address it or take care of it you know, was really challenging,” she said, while Tori agreed. “But, it was something we put a lot of thought into. He was with us in spirit,” Jennie added.

Luke Perry died days after suffering a massive stroke in March. His death came about a month after news of the reboot broke. Perry was 52. The actor rose to fame on Beverly Hills, 90210  from 1990-1995. He later returned to the series again in 1998 until 2000. 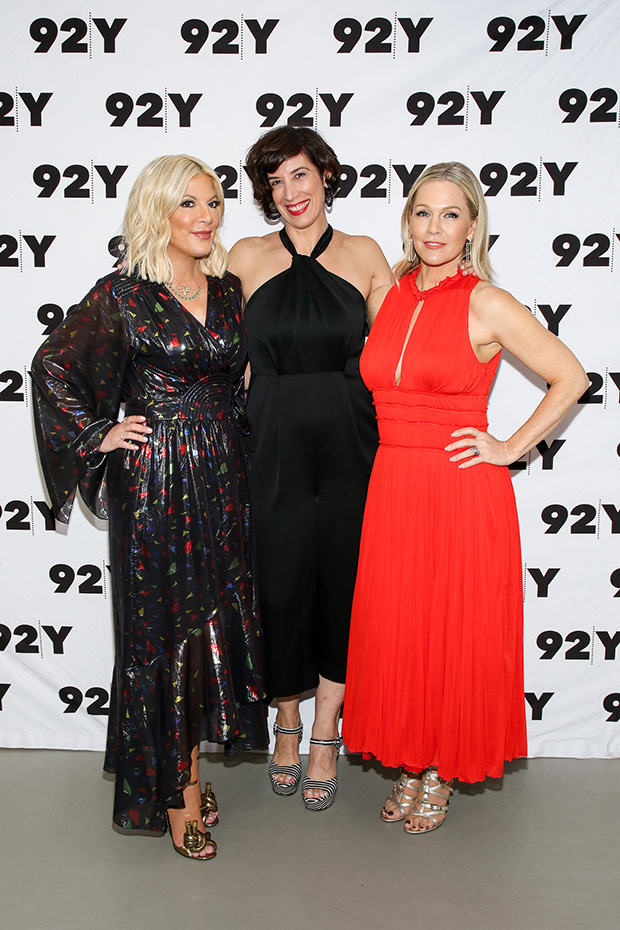 The BH90210 reboot is “the first of its kind,” Tori said, due to the fact that the cast — Jason Priestley, Shannen Doherty, Tori Spelling, Jennie Garth, Ian Ziering, Brian Austin Green, and Gabrielle Carteris — will play “heightened, fictionalized” versions of themselves with real-life storylines. However, the cast will also play their original characters in the meta-reboot.

“We’re playing ourselves, yet playing our characters in the show,” Tori said, while Jennie added, “It definitely felt risky and vulnerable [to do that], but I think that that’s what makes it interesting.”

As for how the “amped up reboot” will work, Tori explained that the show will bring back some things of the past, but it will also add many new aspects about their own lives. “I think it’ll be a little bit of both. I think it’ll be a fresh start for the real characters (us), even though it’s fictionalized versions of us,” Tori said. “But, it’s also a show within a show. We’ll start up where we left off with the characters. So like, I play Tori and [her character] Donna and Jennie plays Jennie and [her character] Kelly at different points.”

Tori and Jennie initially began working on the reboot two years ago, and later pitched the idea to the rest of the cast, via group text message. “We did a group text so that no one would feel that we approached different people at different times,” Tori said, noting that the whole cast serves as producers on the reboot.

Once everyone “understood the concept” Tori and Jennie had pitched, that’s when they began reminiscing on old times in order to create reboot. “It’s so interesting to see how everyone has their own perception of how things happened in the original,” Tori said. “We’ll all be doing group scenes and we’ll be like, ‘Do you remember that time at the Peach Pit’ and then everyone sees it slightly different and we’re like, ‘Oh, that’s what makes it so brilliant’,” she recalled, adding that everyone’s different versions actually made the reboot even better.

“We have our own ideas of how things happened, so all of the stories inspired things that we do in the show because that’s how someone remembered it,” Tori said. “And, it’s just cool because it’s like going back to high school and sometimes you don’t get that opportunity and we did.” BH90210 premieres August 7 on FOX at 9/8c.