Lena Dunham, 33, sure knows how to spice up a red carpet. The actress planted a kiss on co-star Brad Pitt, 55, at the London premiere of their hit film, Once Upon a Time in Hollywood on Tuesday! Lena grabbed Brad, aka one of Hollywood’s hottest and most eligible bachelor’s, and went in for the kiss, which appeared to take him by surprise. Behind them was more of the star-studded cast including, Margot Robbie, Leonardo DiCaprio, Quentin Tarantino, Daniella Pick and Costa Ronin.

The friendly moment between Lena and Brad came as no surprise to fans who knew that the actor attended her 33rd birthday party in May. The Girls star hosted a Spring fundraiser for Friendly House LA, the first recovery home for women in the United States, and Brad was among those on the high profile guest list. The two, who were filming Once Upon a Time in Hollywood at the time, were seeing hugging in photos from the event that Lena shared on Instagram. 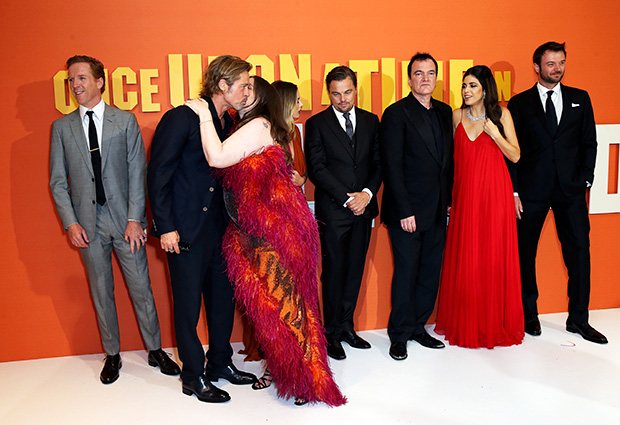 Lena Dunham kisses Brad Pitt in front of their ‘Once Upon a Time in Hollywood’ co-stars at the film’s London premiere on Tuesday, July 30, 2019. (Photo credit: AP Images)

Once Upon a Time in Hollywood, a Quentin Tarantino-directed film, tells the story of a fading western TV star, Rick Dalton (DiCaprio), and his longtime stunt double, Cliff Booth (Pitt), as they struggle to adjust to a Hollywood they no longer recognize. DiCaprio’s character’s next-door neighbor, Sharon Tate is played by his former Wolf of Wall Street on-screen lover, Margot Robbie. Robbie’s character later becomes a victim of the Manson family’s infamous murders. Once Upon a Time in Hollywood, released on July 26, is in theaters now.