After HollywoodLife heard from multiple sources EXCLUSIVELY earlier this week that Cole Sprouse, 26, and Lili Reinhart, 22, broke up after two years of dating, W magazine released a cover and interview of the couple. Cole and Lili had requested to do interviews for the publication separately. The author of the piece even noted at the seemingly strange situation: “Two months later the two would part ways romantically, lending credence to my suspicions that the separate interviews might have been connected to the two of them being uncertain about their future together.”

The actual interviews they did took place in late May, two months before their breakup went public. “We’re not fighting with the idea that people group us together, but we are paired up a lot,” Lili said, offering an explanation for why they wanted to do the interview apart. “We’re acknowledging that we’re in a relationship, but it’s a small part of who we are as people. We want our own separate identities.”

Cole also provided reasoning for the strange circumstance for the separate interviews. “Lili is an incredibly talented individual who speaks for herself and deserves her own box in every single way,” Cole said. “That alone is justification enough for me to do it like this. I don’t think we’re weaving two different narratives here.” At the time, the “two different narratives” could have been in reference to them taking the interviews separately instead of as a couple, when they were still very much still publicly in a relationship and posing for a romantic cover shoot. 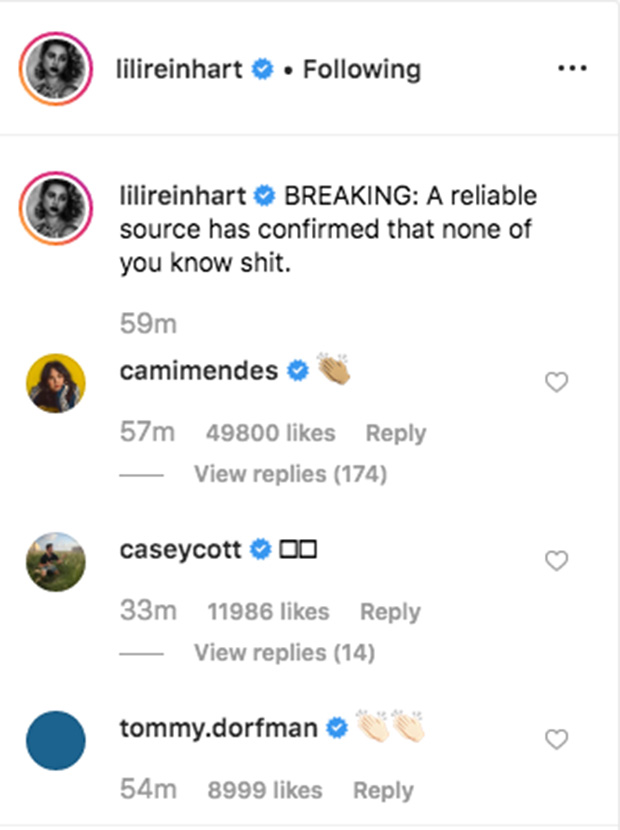 To promote the cover, both Lili and Cole posted on their personal Instagram accounts, teasing the media’s reporting of their split in their captions. “BREAKING: A reliable source has confirmed that none of you know sh*t,” Lili said in a caption of an Instagram post for the magazine. Cole also took the opportunity to make a sarcastic comment: “UNPRECEDENTED: Cole Sprouse and Lili Reinhart consume the flesh of ‘reliable sources’ to fuel their bacchanalian sex cult.” 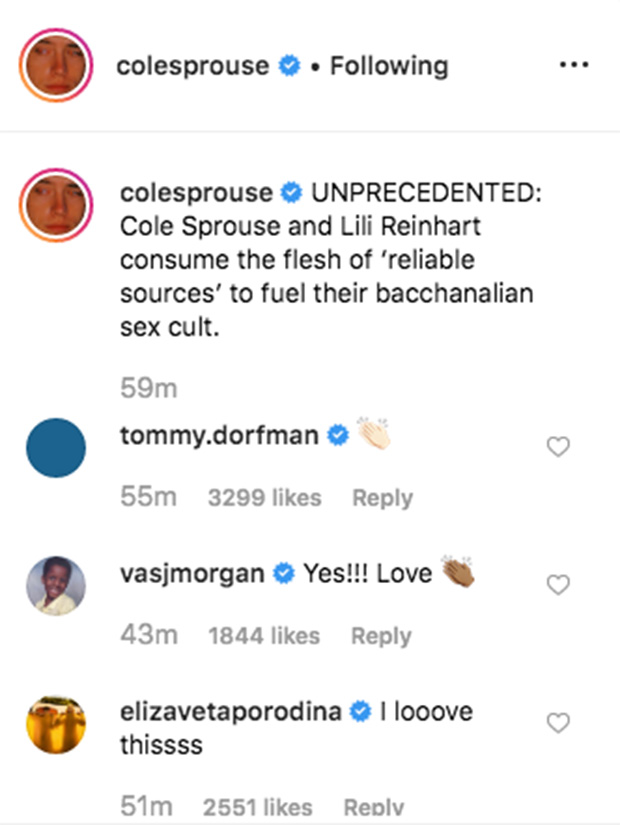 The couple’s Instagram captions could be in reference to the news frenzy that their split caused – or it also could be indicating that they’re reunited. While we may not get a direct confirmation from them on their own social media, HollywoodLife has reached out to their reps for comment.

Related: Spencer Neville: 5 Things To Know About The Actor Spotted With Lili Reinhart At Coachella