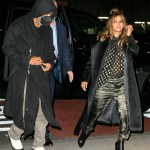 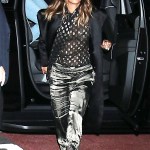 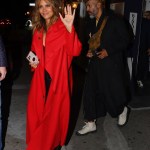 Its few and far between that Halle Berry is seen out with both her daughter Nahla and son Maceo. The family went out for burgers in LA and Nahla is nearly as tall as her mom!

Halle Berry was just your average mom running errands on a Sunday in L.A. on July 21. In a rare sighting with both of her children in tow, she hit up a Michael’s crafts store with daughter Nahla Berry Aubry, 11. and son Maceo Martinez, 5.. The three were seen leaving the store and Nahla’s hit a serious grown spurt. She’s nearly as tall as her 5’5″ movie star mom. Her dad is model Gabriel Aubry so she likely gets that height from her 6’2″ father.

Halle, 52, kept things super casual and was completely makeup free for a Sunday shopping run. She wore her hair back in a knit beanie and had sunglasses on to shield her eyes from the bright rays. The actress kept her killer body hidden in baggy boyfriend jeans and a loose navy t-shirt with a white stripe across the chest. Halle had on a pair of comfy open toe slide on sandals to complete her look.

Beautiful Nahla has Halle’s gorgeous natural curls, which she wore pulled back in a pony tail. She was summer chic in a matching white t-shirt and short set with little gold star patterns and like her mom went with comfy open toe sandals. Maceo  — whose father is Halle’s ex husband, actor Olivier Martinez — could be seen wearing white shorts and a dark t-shirt.

All of that craft shopping left the family hungry so  Halle treated her kids to n-N-Out Burger, stopping by a drive through to pick up her order. It’s a rare treat to see Halle and both her kids all out together, as they’re such a cute family unit.