The fight goes on! — After winning the 2019 Women’s World Cup (the USWNT’s 4th), Alex Morgan and her teammates are not done working. While they may hang up their soccer cleats for a well deserved vacation, they know their fight for equal pay continues. Morgan, 30, and the rest of the U.S. Women’s National Soccer Team made waves throughout the streets of New York City on July 11, when they used the big stage to advocate for equal pay — an event Morgan holds close to her heart.

“I feel like this win in the World Cup wasn’t just a win for women’s soccer, it was a win for women everywhere. I think that we have this platform to be able to raise important issues,” she told HollywoodLife during an exclusive interview at The DICK’S Sporting Goods Foundation’s Sports Matter program panel in New York on July 18. “I think that fans are in tune to the inequalities that we’re faced with, so I think that it’s going to be really great to come back here and get the support that we’ve gotten,” Morgan explained, adding that she and her teammates are looking forward to further addressing “head-on serious issues that we’re faced with in not only Women’s Soccer, but women’s sports in general — and not only in the U.S., but globally.”

The US Women’s National Team has made headlines this past year through their continued fight for equal pay. In March, the team filed a gender discrimination lawsuit against the United States Soccer Federation, stating that they are not paid as much as the men’s team. For example, the prize money for the 2019 Women’s World Cup was $30 million in comparison to the men’s 2018 World Cup prize, which was a whopping $400 million, according to the New York Times.

Nonetheless, Morgan feels as though she and her team made significant progress in the fight for equality and change, especially after chants of “equal pay” roared through the streets of New York City during the victory parade.

“Seeing little girls hold up posters that say ‘equal pay’ was just incredible,” Morgan, who was also recently named one of Time magazine’s most influential people of 2019, said. “Just to see an eight-year-old so in tune with what’s going on and taking control of her future is pretty great,” she continued, noting that their goal isn’t only to reach a female audience.

“It’s not only girls, though, it’s boys too, that we’re seeing wear our jerseys, that we’re seeing cheer us on. It’s fun to be able to see that it’s not about gender, it’s about us putting good product on the field and people wanting to support us and really having fun,” Morgan explained. “People are seeing us as a show and then they’re coming to the show. It’s been really fun, and I think that we’ve seen women’s soccer just continue to grow in this country.” 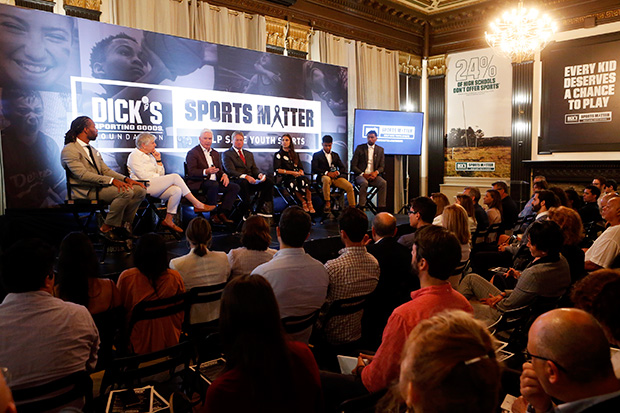 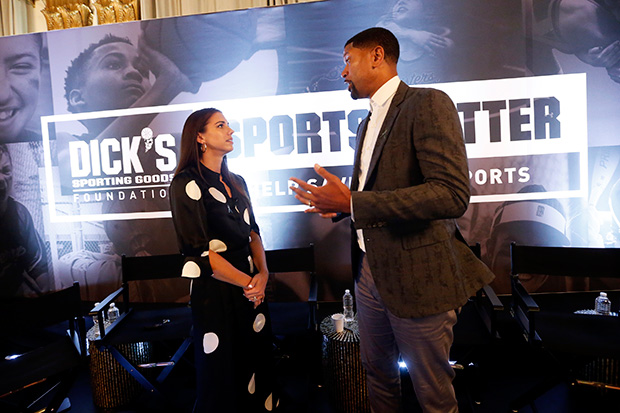 “I played so many sports when I was young, and to see Dick’s Sporting Goods really step up and give a million kids an opportunity to play sports that otherwise wouldn’t have opportunity to do so is so great,” she said. “Sports was really pivotal for me when I was younger. It just gave me an outlet for my energy and my competitiveness. It helped teach me so many things that school couldn’t, and it gave me really a sisterhood to really grow into myself and have so many best friends that I still have today through sports,” she explained, adding, “I think there’s so many things sports can give, and I think Dick’s Sporting Goods gets it, and that’s why I’m here today,” Morgan continued.

Jalen Rose said of the initiative: “Youth sports, to me, means everything. To know the discipline, the sacrifice, to work at the ability to be coached, accept criticism, how to deal with success, how to deal with failure, how to juggle being a student and an athlete. These are all things… these are all skills you’re going to need to be successful in life. Regardless of your job or whatever your career path is, these are great lessons that you get in sports.”

Larry Fitzgerald added: “The aspect of mental health is so important. I feel like the fact that being in a sport changes your mental health… I just love that sports is ultimate unifier is sports. What Dick’s is doing in terms of the money that’s being raised, it can help the cities that use
sports. It gives our next generation of athletes that same hope and aspiration that I was able to have and everybody else on that panel today has.”

The Sports Matter initiative comes off the heels of new research showing that 42% of families in middle and high-school students who don’t participate in sports, say the main reason is the cost. As part of this effort, DICK’S also announced it will match up to $1 million in donations made by customers to The DICK’S Foundation at DICK’S store checkouts or at SportsMatter.org from July 14 through September 13, 2019.