Olivia Culpo appears to have found herself a brand new NFL beau in Christian McCaffrey! The Sports Illustrated Swimsuit model, 27, and the Carolina Panthers running back, 23, were photographed looking quite cozy together in Cabo this week. Olivia and Christian were spotted holding hands as they stepped out for a stroll in their swimsuits. The model showed off her amazing figure in a sultry, red two-piece, while the athlete bared his chiseled body in dark swim shorts. Now, that is one sizzling hot couple.

Olivia and Christian were on a joint getaway with the model’s friend Kristen Louelle and her husband, former 2x Super Bowl champ, Tyler Gaffney. The couples returned home from their romantic vacation on July 10, as seen on Kristen’s Instagram stories. By the way, Kristen is also a Sports Illustrated Swimsuit stunner. So, the two pairs clearly have a lot in common.

Both Christian and Tyler put their NFL bods on display during a day out with Olivia and Kristen when they hit the stage at an outdoor restaurant, as seen in Kristen’s Instagram stories. All four vacationers were seen laughing and cheering in the videos, which featured tasty cocktails and food. 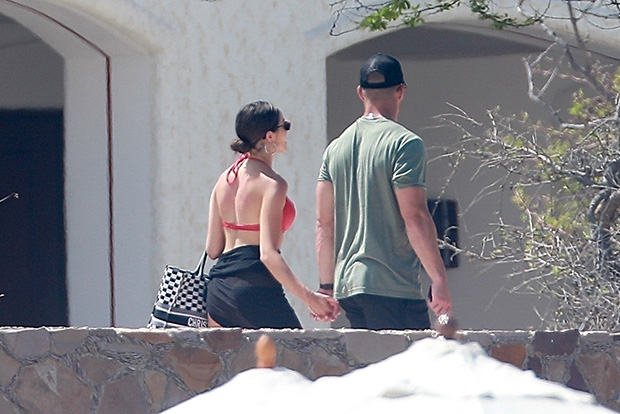 Olivia and Christian were first linked back in May when they subtly shared a few “likes” on one another’s photos on Instagram. They began following each other on the app in April, according to NFL reporter, Dov Kleiman.

Christian, a Stamford alum, is entering his third year with the Panthers. And, it looks like this could have been his last getaway before he reports to training camp at the end of this month.

Olivia previously dated Detroit Lions wide receiver Danny Amendola on and off for two years. They split for good last October after he was spotted getting cozy at the beach with sports reporter Bianca Peters in Miami, while the model was in Australia for work. The former Miss Universe (2012) was also linked to Zedd during Coachella in April.