UPDATE 7/10/19 at 10:10 a.m.: Wendy confirmed on her talk show, The Wendy Williams Show, on July 10 that the mystery man in the photo is a member of her team named Julian. She also said that they staged the kiss to “f with the paparazzi,” who had been following her around all afternoon. Julian was in the audience of The Wendy Williams Show when she made the confession.

Wendy Williams, 54, isn’t wasting her time by sitting at home and crying now that her divorce from Kevin Hunter is in full swing. On the July 8 episode of The Wendy Show she told her audience that she’s officially “off the market” and dating an age appropriate doctor. She wouldn’t divulge her boyfriend’s name, but she did dish that just like her, he’s “in his 50’s too.” But then, the day after Wendy’s romance reveal, she was photographed getting a kiss on the cheek from a very handsome — and much younger man.

In a picture taken on July 9 in NYC, Wendy looked chic in head to toe black, topped off with cat eye sunglasses. Her long blonde hair was blown straight and she seemed to love the attention she got from a hunky mystery man. The dark haired hottie was also pictured showing off his buff body in a tight white long sleeved t-shirt with navy shorts and turquoise sneakers. And he had the best accessory ever — a fluffy white Maltese dog.

The good looking mystery hunk isn’t the same younger man that Wendy was spotted with last month. In fact, Wendy cleared up all the rumors about her 27-year-old rumored boyfriend, Marc Tomblin, and it turns out that thy are just friends. Wendy confirmed on the June 8 episode of her eponymous talk show that although the paparazzi caught them running around New York City holding hands, there’s nothing going on between them. “Listen, it’s not who you think! Mama doesn’t deal with children,” she said. “It just so happens, with my charm and whit, that I attract people of all ages.” 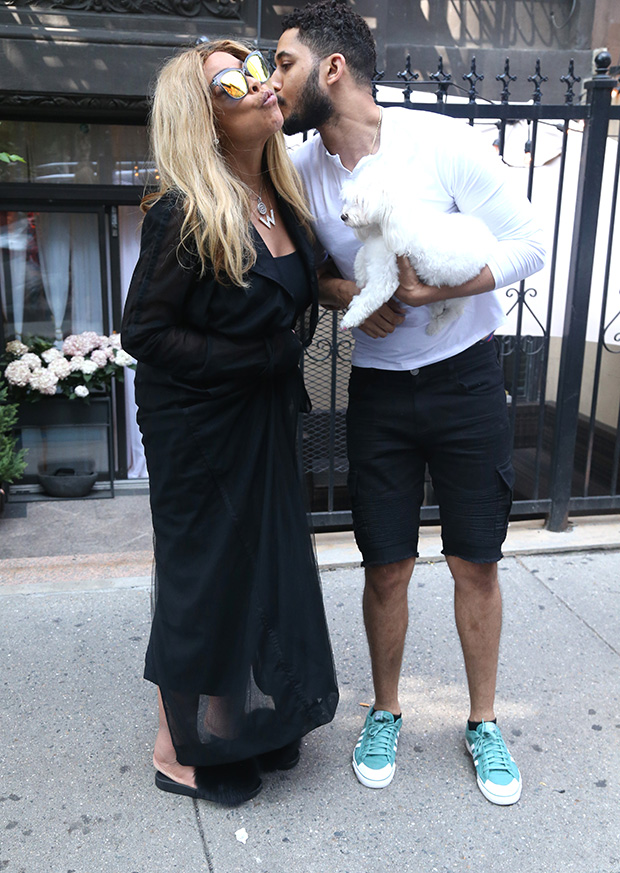 Wendy looks very happy in the pictures snapped of her and the mystery man on June 9 in NYC — and she has every reason to be. Not only is she falling hard for her doctor boyfriend, but her son Kevin Hunter Jr., 18, is now free of the assault charges against him. Kevin, who was charged with simple assault on May 21 after a physical altercation with his father, Kevin Hunter Sr., had all the charges against him dropped on June 9. His attorney Raymond Hamlin told E! News that the case was dismissed. “The father never wanted to prosecute his own son,” he told the outlet. “They have reconciled since. Things happen in families at times, unfortunately, but they are good now.”