Stormi Webster just landed her first magazine cover at the age of 1! The little one, who was born on February 1, 2018, shares the cover of Harper’s Bazaar Arabia with mom Kylie Jenner, 21, and grandma, Kris Jenner, 63, for the mag’s July/August power issue. The new issue, which focuses on Kris and Kylie’s “Art of Influence” also features numerous covers of the mother-daughter duo, along with an accompanying interview.

Harper’s Bazaar Arabia previewed the joint interview on its official Instagram page, and shared a quote by Kylie about her unbreakable bond with Kris. “When I became a mother, my perspective on life completely changed, and so did how I look at my own mum and appreciate all the things that she’s done for me,” Kylie says in the interview. “Now I can understand the way that she feels about me, the way that she loves me, and how strong her love is for all her kids.“ This marks the first time the three generations have posed together for a magazine cover.

The Keep Up With The Kardashians stars coordinated in cheetah looks for one of the three covers. Stormi, who rocked a cute top knot in her hair, sat on her mother’s lap in a cheetah-print dress with green and red designs. Meanwhile, the Kylie Cosmetics CEO looked business savvy in a black pencil skirt and blazer with touches of cheetah-print throughout her top. And, the Kardashian family matriarch, Kris stunned in a curve-hugging, off-the-shoulder cheetah-print dress. Both Kris and Kylie wore pointed black stilettos and sunglasses, while Stormi went barefoot. 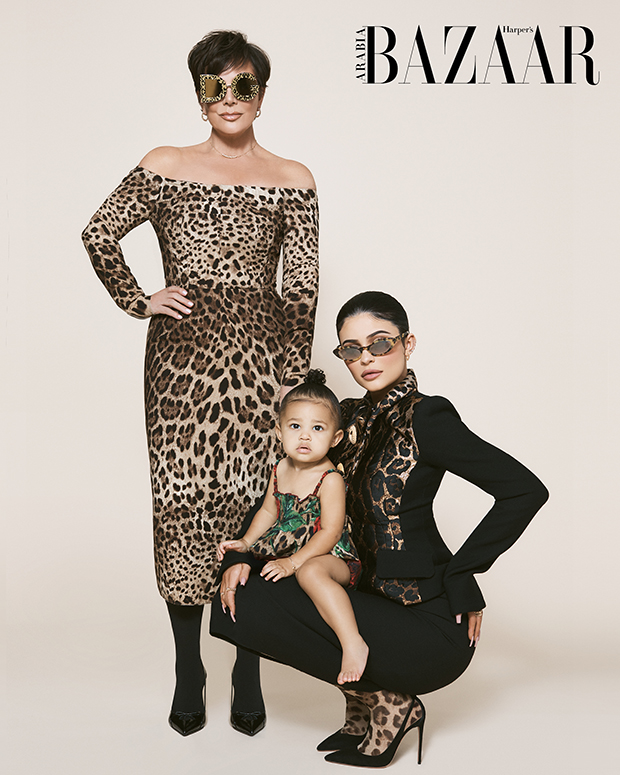 Both Kylie and Kris took to Instagram to show off their latest magazine covers. “Here’s to STRONG WOMEN! May we know them, may we be them, may we raise them,” Kylie captioned a shot of her cover with Stormi and Kris.

In another snap from the photoshoot, which featured Kris and Kylie holding hands in their cheetah-print looks, Kylie wrote: “brb building an empire”. She also said that Kris is her “favorite person” in a another post promoting an additional cover.