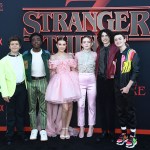 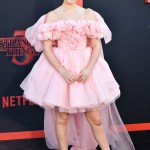 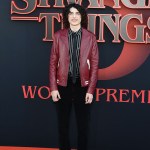 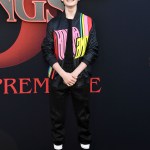 Finn Wolfhard and Millie Bobby Brown were spotted having a blast at the ‘Stranger Things’ season three party, dancing the night away.

Two of the show’s breakout stars owned the room while dancing with each other. Millie wore a gorgeous pink ruffled off-the-shoulder dress with sparkly combat boots, while Finn looked chic in a black and white striped button-down top and black pants. He wore his signature curly hair down while he twirled his young co-star.

Finn and Millie weren’t the only ones enjoying themselves. Also at the event were stars Winona Ryder, 47, David Harbour, 44, Gaten Matarazzo, 16, Caleb McLaughlin, 17, Noah Schnapp, 14, Sadie Sink, 17, Natalia Dyer, 22, Charlie Heaton, 25, Dacre Montgomery, 24, Joe Keery, 27, and more. A party eyewitness revealed to HollywoodLife that Millie, David, Finn, and Natalia were among those first to hit up the dance floor.

In the third season, which premieres on July 4 on Netflix, the Hawkins, Indiana kids have yet to battle against another evil force. This time around, it’s the summer of 1985, and the kids are a little bit older and wiser when it comes to tackling evil and conflicts in their own friendship. We’re so excited to watch it – we know what we’ll be binging on Netflix next week, for sure!