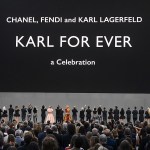 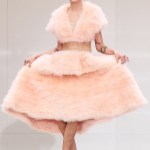 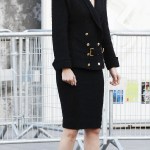 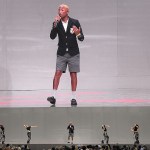 More than 4 months after Karl Lagerfeld’s passing, he was honored by some of the biggest faces in fashion, including his long-time muses Gigi Hadid & Cara Delevingne.

Famed fashion fashion icon and Chanel Creative Director Karl Lagerfeld was honored in Paris on June 20 with a memorial event that boasted a star-studded guest list. Celebrities such as Gigi Hadid, 24, Cara Delevingne, 26, Pharrell, 46, and Tilda Swinton, 58, were among more than 1,000 guests who flooded Paris’ massive Grand Palais. The stars all took turns paying homage to Karl during the service, taking the stage with both poems and musical performances.

Karl’s former muses did him proud and showed up to the ceremony in elaborate ensembles. Cara looked breathtaking in an eye-catching feathered gown fit for a princess. The peach-colored frock was undeniably one of the standout looks from the event, and seeing as Cara was the long-time muse to the designer and was often spotted front row at his shows, it’s no surprise she went all out for the tribute ceremony. Meanwhile, Gigi, who closed out the runway at Karl’s final Fendi show, looked chic in a belted black dress and sleek pointy-toed pumps.

The tribute, entitled Karl For Ever, was organized by Chanel, Fendi and Karl’s namesake label and was designed by theater and opera director Robert Carsen. Other notable attendees included Dior creative director Maria Grazia Chiuri, filmmaker Baz Luhrmann and Karl’s cat, an icon in his own right, Choupette.

Karl passed away on Feb. 19 at 85-years-old. The fashion icon had been working hard and was still designing up until his death. While reports had surfaced that claimed he had pancreatic cancer, this was never confirmed. This past March, Chanel also paid tribute to the designer with a moment of silence at the Fall-Winter 2019 runway show.

Chanel remembered the icon after his passing with the following statement: “An extraordinary creative individual, Karl Lagerfeld reinvented the brand’s codes created by Gabrielle Chanel: the CHANEL jacket and suit, the little black dress, the precious tweeds, the two-tone shoes, the quilted handbags, the pearls and costume jewelry. Regarding Gabrielle Chanel, he said, ‘My job is not to do what she did, but what she would have done. The good thing about Chanel is it is an idea you can adapt to many things. A prolific creative mind with endless imagination, Karl Lagerfeld explored many artistic horizons, including photography and short films. The House of CHANEL benefited from his talent for all the branding campaigns related to Fashion since 1987. Finally, one cannot refer to Karl Lagerfeld without mentioning his innate sense of repartee and self-mockery.”