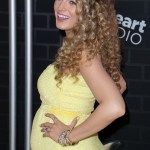 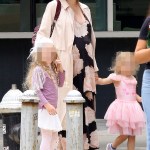 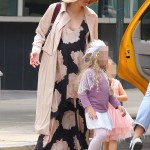 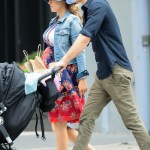 Pregnancy always looks great on Blake Lively, and that’s no different the third time around! The actress looked beyond amazing while stepping out in a floral mini dress with her baby bump front and center on June 19.

Blake Lively was photographed out and about in New York City with her husband, Ryan Reynolds, and their daughters, James, 4 and Inez, 2, on June 19. The 31-year-old is currently pregnant with her and Ryan’s third child, so her baby bump was on full display during the outing. Blake rocked a blue, red and white mini dress with floral design, which hugged her baby bump and put it on full display. She paired the look with sneakers, a jean jacket and floppy hat, while wearing minimal makeup for the daytime stroll. Blake walked alongside her husband as he pushed the girls in a stroller on the walk.

Although it’s unclear how many months along Blake is in her pregnancy, she certainly already looks ready to POP! The actress’ baby news was kept under wraps until May 2, when she attended the Detective Pikachu premiere with Ryan and already had a burgeoning bump. Blake was absolutely glowing on the red carpet, and her sexy maternity look was definitely the center of attention. During her last pregnancy, Blake did an entire press tour to promote her movie, The Shallows, so she’s no stranger to having to dress up her bump, and she’s proven that she still has the touch this time around!

During this pregnancy, though, Blake has been keeping much more low-key. In fact, she’s only been photographed out once since the pregnancy news was revealed. Considering Ryan has been quite busy, Blake has likely been at home with the girls and preparing to welcome another little one!

Blake and Ryan first met on the set of their movie, The Green Lantern, while he was still married to Scarlett Johansson. Ryan and Scarlett split at the end of 2010, and less than a year later, he was in a relationship with Blake. They got married in Sept. 2012, then welcomed James in Dec. 2014 and Inez in Sept. 2016.