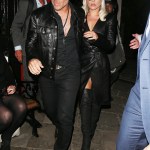 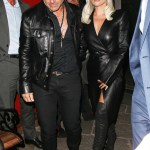 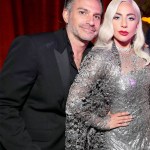 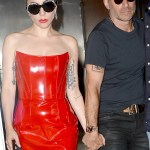 Lady Gaga’s a single woman, but kissed a very married man onstage at her Las Vegas residency, locking lips with her trumpet player.

Lady Gaga took the lyrics to her song a little too seriously on June 15 during her Las Vegas Enigma residency show. During a jazzy number she sang “So darling, kiss me” while leaning in close to her trumpet player Brian Newman. The 33-year-old then locked lips with the handsome bow-tied musician, but he’a a married man! The two are longtime pals going back to her pre-fame days and while Gaga has been single since breaking up with fiance Christian Carino, 50, in February, some fans who saw video of the smooch thought it was in poor taste.

“:I know they are friends since…. Forever. But Christ’s sake, he’s married!!! GAGA should behave better,” one fan wrote under the video that was posted to the Gaga Daily Twitter page. Another posted a gif of her singing with “They call me home wrecker” over it. One fan commented “gaga could you STOPPPPP he’s married” and another noted “Guuuurl! Wtf are you doing he’s married and you’re his child’s godmother!!!!”

Brian’s wife Angie Pontani has nothing to worry about, as some fans noted she was in the audience. It’s true that Gaga is the godmother to their child and Brian has known her from back when she was just breaking big.“One night after she made her first hit record she came to see us in TriBeCa. We ended up playing ‘Someone to Watch Over Me’ together, and it was the start of a beautiful musical friendship,” he told Forbes in November of 2018. “She’s just a great musician and a great person. The godmother to my child and a beautiful human being.”

Even the Gaga Daily site noted that she and Brian and “Friendship goals.” Brian served as the bandleader for Gaga’s 2014 jazz album with Tony Bennett, 92, called  Cheek to Cheek and has been her longtime trumpet player. So there’s no home wrecking going on here as they were just pals having a fun moment in a song.