Joseph Baena, 21, the son Arnold Schwarzenegger, 71, had with former housekeeper Mildred Patricia Baena, appears to have no bad blood with his half-sister Katherine Schwarzenegger, 29, even though he was seemingly not invited to her June 8 wedding. The hunky Pepperdine University grad took to Instagram to congratulate Katherine on her marriage to Chris Pratt, 39, in a comment he left on the wedding photo she posted on June 9. “Congratulations! 💕🍾,” Joseph, who goes by “projoe2” on Instagram, wrote in his comment.

Joseph’s congratulations comes after he was noticeably absent from Katherine and Chris’ wedding. The Arnold mini-me was seen at the gym at the same time the nuptials were taking place, leading many to believe he was never invited to the special event. It wouldn’t be too surprising considering the rocky relationship Joseph and his siblings have seemed to have over the years. He wasn’t confirmed to be Arnold’s son until 2011, after the Kindergarten Cop actor came forward and admitted Joseph was conceived with Mildred during his marriage to his wife, Maria Shriver, 63, who he shares his other children, Katherine, Christina Schwarzenegger, 27, Patrick Schwarzenegger, 25, and Christopher Schwarzenegger, 21, with. Arnold’s confession led to a separation from Maria and what was sure to be a strain on the family.

The headline-making scandal seemed to also affect the relationship between Joseph and his half-siblings. Although he follows all of them on social media, none of them follow him back, and in a post Katherine shared for National Sibling Day, Joseph was the only one of her siblings she left out. “I LOVE THEM SO MUCH #nationalsiblingsday,” she captioned the post, which showed her posing with Christina, Patrick, and Christopher. 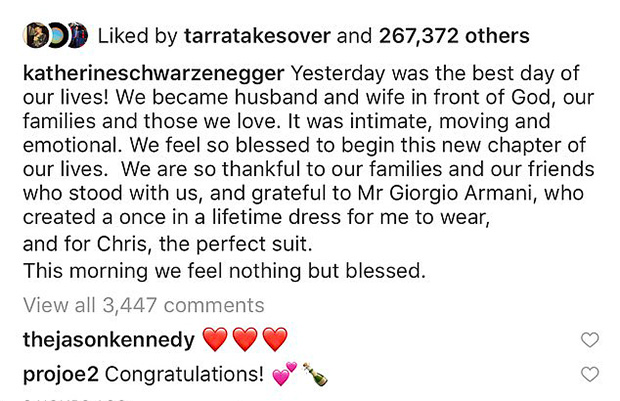 Let’s hope Joseph and the rest of his half-siblings can eventually find some common ground and appreciate each other in the future!