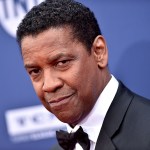 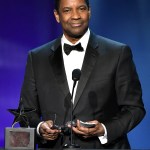 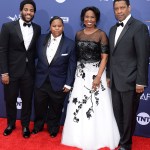 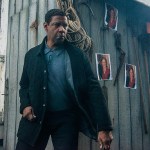 Denzel Washington’s family was there to support him as he received the Lifetime Achievement Award at the 2019 AFI Gala. The family was absolutely beaming in photos from their rare appearance together.

Denzel Washington, 64, received the ultimate honor at the 2019 The American Film Institute gala where he was bestowed their Lifetime Achievement Award, and the actor’s family was sure to show up to support him. In an incredibly rare appearance, the star’s wife, Pauletta Washington, 68, as well as two of their children, Katia, 31, and Malcolm, 28, showed face at prestigious event. The family even posed for a photo together at the June 6 tribute gala and were all smiles at the annual affair. The actor’s kids made sure to dress to the nines, with Malcolm donning a classic black tux, and older sis Katia looking stylish in a suit herself. While the spotlight was on Denzel, his wife’s gown was not to be ignored. She sparkled in a black and white gown with sequin detailing, and the entire family was the picture of glamour on the special night!

Denzel’s fellow Hollywood stars were there to celebrate with him as well. Michael B. Jordan and Chadwick Boseman showed up to the affair, as did Julia Roberts. The night even featured a live performance from Jennifer Hudson, but the best surprise of the night may have been an appearance from Beyonce. Queen Bey was on hand to present AFI’s Franklin J. Schaffner Alumni Medal to Melina Matsoukas at the event.

As the Remember The Titans actor took the stage, he was sure to give a shout out to his family. He used the spotlight to praise his wife for achievements of her own! “The most important person in my life, 40 years. I know she would like me to say, all right, we, we shacked up together when we were nine. 40 years of sacrifice, 40 years of forgiveness. She taught me about faith, spirituality, love, real love, unwavering love. In spite of myself, I would not be alive without Pauletta Washington,” he sweetly said, according to Closer. “I wouldn’t be alive. My wife is a child prodigy. She’s a concert pianist, yeah, people don’t know. Julliard, graduate masters, great musician, great singer, great mother, great wife. I ask you, please, standup and give it up for my wife. My wife, my better half. Bless you, Pauletta.”

Congrats to Denzel on the well-earned accolade. The star-studded ceremony is set to air on TNT on Thursday, June 20, at 10 PM EST.