Amber Rose, 35, and her boyfriend A.E., whose real name is Alexander Edwards, were all smiles exiting a lunch date at Il Pistaio in Beverly Hills on Thursday. The expectant parents waited for her car at valet when she was photographed caressing her pregnant belly in a grey tank and matching leggings. Meanwhile, her man put his arm around her as they held hands. — See the sweet snap, below!

Muva appeared to be in great spirits as she donned her new black locks. She rocked white tinted shades and carried a matching bag that read “Display Only”. AE, who is the vice president of A&R at Def Jam, looked stylish in blood orange tinted sunnies and a silver chain. His bleach blonde hair stood out, despite his casual attire, which included grey sweats and a black polo.

While the couple waited for Amber’s car, TMZ cameras caught up with them for a little sex talk. The camera man asked them if they were still having intercourse while Amber’s been “cooking” their baby. “It’s different, but it’s fire,” AE responded with a sly grin, as the camera man oohed and awed. Amber found AE’s comment funny and laughed, before she playfully told him to “stop talking.” 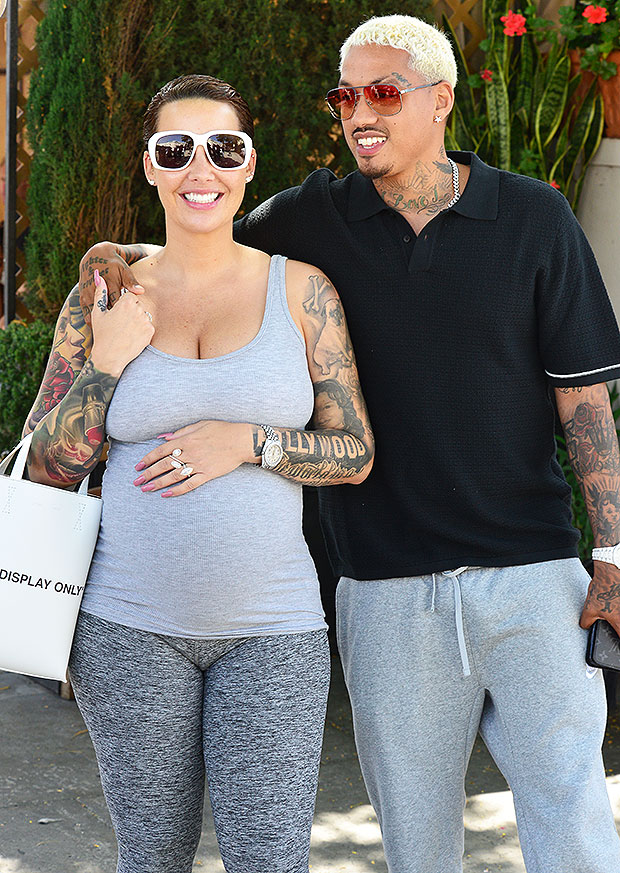 It was great to see Amber out and about, since she’s been suffering from hyperemesis gravidarum — a condition in pregnant women that causes severe nausea. The model experienced the same condition when she was pregnant with her first child, Sebastian Taylor Thomaz, now 6, who she shares with her ex, rapper Wiz Khalifa. Both Kate Middleton and Kim Kardashian also suffered from hyperemesis gravidarum.

Amber explained that she had been couch-ridden in a three-part video on Instagram just a few weeks before she was seen out to lunch with AE. “I said I was going to document this pregnancy a little bit more than I did with Sebastian. With Sebastian, I had hyperemesis, and I have again with this baby,” she admitted during the first part of her video update. “For people that don’t know what it is, it’s extreme nausea, vomiting and dehydration,” she explained, adding that she was “really, really tired,” at the moment.

“I can eat a little more now because I’m in my second trimester, but not much,” Amber continued. “I pretty much sleep all day and I try to be cute and get my hair done, and I just slept in it and messed it up. But, all in all, babies are a blessing.”

Amber later gave credit to AE for taking care of her throughout the tough time. But, she was a good sport about the condition and explained how excited and blessed she felt to be pregnant. Amber announced that they were expecting their first child together back in April with a photo of her at an ultrasound appointment.