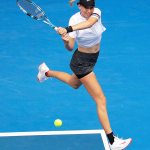 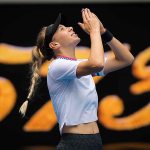 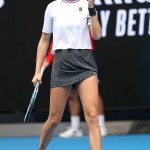 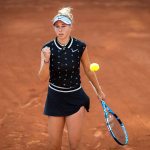 Amanda Anisimova shocked the world when she upset Simona Halep in the French Open quarterfinals. Before she heads to the semis, here’s what you need to know about this 17-year-old tennis superstar.

“I can’t believe it. I’ve been working so hard, but I didn’t believe it would pay off like this,” Amanda Anismova, 17, said courtside after she defeated Simona Halep, 27, in the 2019 French Open quarterfinals on June 6, according to The Guardian. The teenage American eliminated the defending French Open champion in two straight sets, 6-2, 6-4. The upset shocked the tennis world, and that comes after Serena Williams, 37, lost to Sofia Kenin, 20, in the Round of 32. “It’s more than I could ever have asked for,” Amanda added. “Going out today, I knew I’d been playing well because I was in the quarter-finals. I knew I had to something different.”

“This is one of the best matches I’ve ever played. I’ve had some great memories her from two years ago in the juniors,” she added. Now, Amanda goes on to play Australian Ashleigh Barty, 23, for a spot in the French Open final. Before that match, taking place on June 7 at 5:00 AM ET, goes down, here’s what you need to know about Amanda.

1. She’s the pride of New Jersey…and Florida. Amanda Anisimova is the daughter of Olga and Konstantin Anismova, two Russian emigrants who moved to New Jersey in hopes of a better life. “My wife had relatives who had lived a long time in the United States,” he said. “They sent us an invitation to come visit this country,” he told The New York Times in 2017.

“We really like Spain, but then we recognized when we visited America that everybody who comes here is going to feel like home…America is a united country where people come from all over the world, and after a couple of years, they feel this is home, you know?” This home would become Florida, as the family would relocate to the Sunshine State to help Amanda’s older sister, Maria, train for her college tennis career.

2. Her sister inspired her to pick up the racket. Amanda’s older sister, Maria, started playing at age 10 in Moscow. Amanda, who was born in 2001 in American, watched her big sister play and credits her the reason she got into the sport. “My sister ended up playing for UPenn at college,” she told WTA.com. “So when I was little she was playing tennis. I always saw her playing, and I wanted to do it too. That’s how I got into it, and my parents got into it too.”

3. She turned pro at age 15. Amanda is the youngest player, currently, ranked in the top 100 by the Women’s Tennis Association. She won her first WTA title at the Copa Colsanitas in April 2019, less than three years after she turned pro. She found some success as a junior. The ITF junior ranked her at No. 2 in 2016, and that year, she was the first American finalist in the junior French Open since Ashley Harkleroad made it all the way there in 2002. She also won the Grade 1 Yucatán Cup and the Grade A Copa Gerdau in 2017.

4. She loves the beach, French Montana, and Instagram. Amanda said in a 2017 profile that her favorite song at the time was “Unforgettable” by French Montana. A lot can change in a year, including a young woman’s playlist. However, it’s safe to say she still enjoys going to the beach (the activity she listed as “favorite way to spend time with friends”) and she still uses Instagram.

“My handle is just my name, amandaanisimova. I just like looking through what all my friends are doing and seeing all their pictures. I don’t really spend that much time on my phone anymore, though. I’m trying to limit that,” she wrote.”

5. That’s Dr. Anisimova to you. Amanda’s a big fan of Grey’s Anatomy and met some of the cast on a trip to Los Angeles. Her love of the long-running medical drama has influenced her backup plan, in case this tennis thing doesn’t work out. “If I didn’t play tennis, I’d want to be a surgeon,” she said. “Actually what I want to do is go to online college while I’m in my pro career and then go to med school after I finish.”