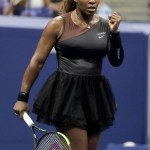 Serena Williams made a bold fashion statement against the French Tennis Federation’s ban on her 2018 catsuit when she played the French Open in an outfit that had empowering words written on it.

Serena Williams, 37, is standing up for what she believes in the form of her fashion. The champion tennis player caught some major attention during the 2019 French Open on May 27 when she revealed an outfit that seemed to be a direct response to the French Tennis Federation banning the catsuit she wore during the 2018 French Open while calling it “disrespectful”. The black and white superhero-inspired outfit was designed by Virgil Abloh and Nike and consisted of a crop top and skirt for when she was on the court and a matching jacket that had empowering words, including “Champion”, “Queen”, “Goddess”, and “Mother”, written in French on it to top it off. Serena won her match against Russian tennis player Vitalia Diatchenko, 28, at the tournament while wearing the powerful look with scores of 6-0, 6-1.

Serena, took to social media the day before the French Open to show off the entire outfit, which also came with a cape, in black and white pictures she posed for. “Let the Roland Garros begin. Here is my French Open look designed by @virgilabloh and @nike,” her caption for the photos read.

Serena’s known for making statements when she doesn’t agree with things and her latest outfit was no exception. Last Aug., the French Tennis Federation president, Bernard Giudicelli, spoke out about the decision to have a new dress code in the sport of tennis and why. “I believe we have sometimes gone too far,” he explained. “Serena’s outfit [at the 2018 French Open], for example, would no longer be accepted. You have to respect the game and the place.”

Serena’s catsuit she wore at the 2018 French Open, which goes against the new dress code for the tournament, consisted of a black tight short-sleeved top and pants. Serena, who is known for usually wearing tutus on the court, took to Instagram shortly before the ban went into effect and explained the reasoning behind wearing the catsuit was to help her post-pregnancy body after giving birth to her daughter, Alexis in Sept. 2017. “Catsuit anyone? For all the moms out there who had a tough recovery from pregnancy—here you go. If I can do it, so can you. Love you all!!” her caption for a pic of the catsuit read.