Serena Williams’ outfit was a grand slam at the Australian Open on January 15! She made a bold and stylish statement with her custom, teal Nike romper and fishnets! See her full look!

Sporting in style! Serena Williams‘ outfit stole the show at the Australian Open on Tuesday, January 15! For her first match of the annual tournament — against Germany’s Tatjana Maria — the tennis legend, 37, wore a custom Nike romper in teal, with black and white stripes. But, it was her fishnets underneath her mini jumpsuit that really caught the eyes of onlookers.

After the match, in which she defeated Maria, Williams referred to her outfit as her “Serena-tard” in a post-game press conference. And, her bright ensemble was all fans could talk about online! “Never cease to AMAZE. Game was on point, Outfit was SICK. Standing OVATION,” one fan tweeted. “#Serena always stirs the fashion milkshake,” another raved. Thousands of other complimentary tweets continued to pour in, including this one: “Her outfits never disappoint!”

While her outfit nearly took over the match, it was Serena’s return to the Aussie Open that ultimately had spectators in awe. This marked Serena’s first time back at the Australian Open since giving birth to her daughter, Alexis Olympia, with husband Alexis Ohanian. She posted a video on Instagram, where she let fans know she was “ready” and locked in for her return to Melbourne. After her win against Maria, Serena is now 18-0 in the 1st round of the Australian Open — the most such wins overall and the most without a loss. Serena previously won the 2016 Australian Open while she was in the early stages of her pregnancy. 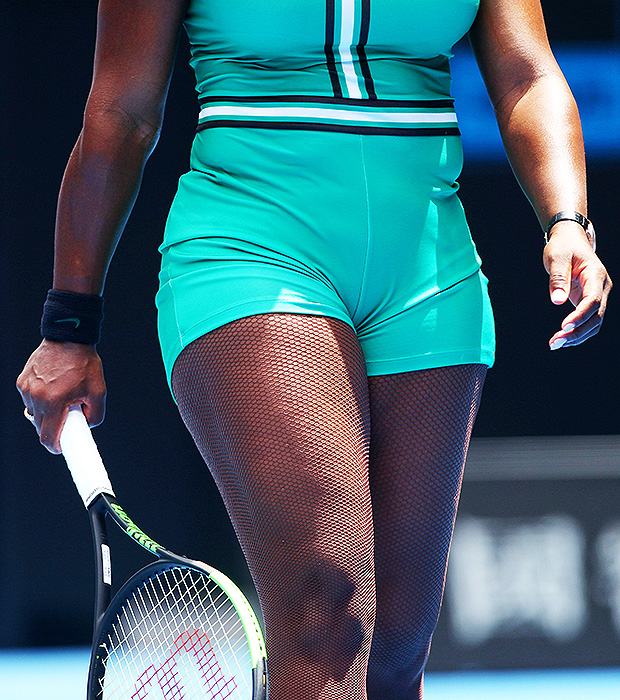 Serena Williams wears a bright, teal Nike romper with fishnets underneath at her first match of the Australian Open on Tuesday, January 15, 2019.

Serena Williams consoled Tatjana Maria after cruising to a win.

She's now 18-0 in the 1st round of the Australian Open, the most such wins overall and the most without a loss. pic.twitter.com/PS0zVHFwIv

Serena is known for her bold fashion on the court. In May 2018, she stirred up controversy for wearing a skin-tight black catsuit to the French Open. The French Tennis Federation’s  President Bernard Giudicelli later criticized her in August and promised to put forth stricter dress code rules that would ban her tight attire.

However, the Women’s Tennis Association Rules Committee and Board of Directors later approved Serena’s look. In a shortened version of their rule changes for 2019, the organization stated that “leggings and mid-thigh-length compression shorts may be worn with or without a skirt, shorts, or dress.” Just call her the catsuit queen of the tennis court!