Justin Bieber, 25, is putting his physical and mental health at the forefront as he continues to battle through his “deep rooted issues.” The “I Don’t Care” singer was spotted getting his swell on — while shirtless — at a gym in Los Angeles on Wednesday. Justin was photographed holding resistance bands above of his head as she showed off his abs and tattoos. — Check out the new photos, below!

JB looked relaxed and focused during his workout. He wore black shorts with his signature Calvin Klein underwear poking out the top. The singer donned New Balance sneakers with high white socks by one of his favorite fashion brands, Supreme. Justin took some time to himself at the gym while his wife, Hailey Bieber, 22, was seen out and about in LA that same day.

Justin’s workout snap came just a few days after he shared his own shirtless photo while in the studio. Hailey joined him at work, and stood by his side in the black and white photo. The singer appears to be in good spirits these days after he admitted that he’s been dealing with personal issues concerning his mental health. JB has dealt with depression and anxiety throughout the years, and has recently been vocal about his struggles. 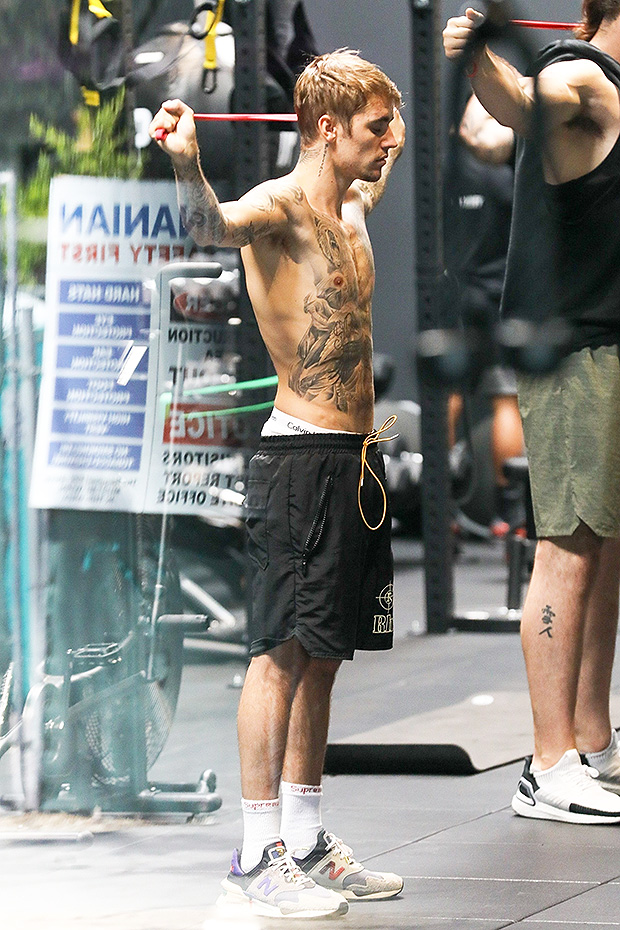 Back in March, he shared a note with his fans that he had to put music on hold to work on himself. “Music is very important to me but Nothing comes before my family and my health,” Justin wrote in part in a long Instagram post message on March 25. He promised to return with a “kick ass album ASAP” in his message. Just weeks before that, Justin took to Instagram on March 9, where he admitted that he had been “struggling a lot.”

As the singer continues to improve his health and work on new music, he’s also gearing up for his nuptials with fiancee Hailey Baldwin (now Bieber). The couple tied the knot in a secret courthouse ceremony last September. They made plans to have another wedding with their family and friends later on, but never set a date. Justin and Hailey reportedly planned to have the second ceremony in early 2019, however, they’ve apparently put the celebration on hold.

JB proposed to Hailey last July while the two were in the Bahamas together. The “No Brainer” singer popped the question in front of a crowd at Baker’s Bay with a massive, oval-cut diamond ring. The surprise engagement came after Justin and Hailey, who previously dated in 2015 and 2016, rekindled their romance in June 2018.