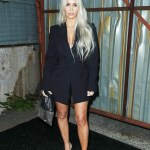 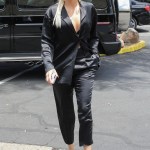 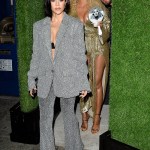 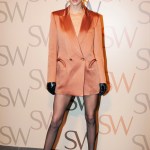 Khloe Kardashian looked all business in a pantsuit on the day of Lamar Odom’s book release. Khloe’s face still remained cool and collected, even after a new interview about her ex’s ‘drug-induced rage.’

Khloe Kardashian’s fashion statement was professional yet chic on May 28. All eyes were on the Keeping Up with the Kardashians star as it was the same day Lamar Odom’s memoir Darkness to Light hit bookshelves, but she didn’t betray any emotions as she kept her eyes hidden behind purple aviators and strutted in pointed snake print heels and a satin black pantsuit. Khloe, 34, added extra edge by letting a black bra peak out from underneath her blazer. Khloe topped off the look with a high platinum ponytail for her lunch date with sister Kim Kardashian, 38, and Kourtney Kardashian’s ex, Scott Disick, 36.

Despite Khloe’s aloof face in the photo, Lamar described wild stories of him and his ex in his new book. The former NBA star revealed that he once threatened to “kill” Khloe while using drugs and hallucinating, as he quoted himself saying, “I’ll f**king kill you! You don’t know what I’m capable of!” He also reflected on this “drug-induced rage” in an interview for Good Morning America on May 28, saying, “I’m pretty sure she had to be scared at that point in time…I’m thinking about it now, I couldn’t believe how I was treating that queen like that.”

That was just one passage among many shocking lines in the basketball player’s memoir. Lamar even accused Khloe of walking into a hotel room full of “naked women everywhere” and allegedly “beating” a stripper who was with him in 2012. “Khloe’s beating the s**t out of one of the girls who tried to protest. She’s dropping vicious blows all over the top of this girl’s head,” Lamar wrote, adding, “Kris [Jenner] is screaming, and her security guard jumps in and pulls Khloe off the beaten stripper.”

Khloe appeared much more vulnerable on her Instagram Story, however, as she fired off a string of cryptic quotes on the day of Lamar’s book release. “Don’t let the Internet rush you. No one is posting their failures,” one such adage read, while another quote read, “I don’t know who needs to hear this but they were never going to change. You did the right thing.”