Katie Holmes, 40, and  Jamie Foxx, 51, look really good together! The couple was photographed outside the actor’s New York City hotel late Tuesday night, where they appeared to be in a private garage while exiting a black Escalade vehicle. The pair went back to Jamie’s hotel after he made a guest appearance on The Tonight show with Jimmy Fallon with his daughter Corinne. The father-daughter duo are said to be competing in a “Name That Song” skit on the late night show.

Both stars were dressed casually, as a driver helped them grab their belongings. Jamie wore a matching grey sweatsuit with white and blue sneakers. He carried a black bag and matching backpack. Meanwhile, Katie was a bit more dressed up in a coral colored coat with oversized buttons and what appeared to be a white ensemble underneath. She flashed her toned legs and wore peep toe gold stilettos.

Although the notoriously private couple has been dating for nearly six years, it was just a few weeks ago that they made their red carpet debut as a couple at the Met Gala in New York City. The couple posed for photos inside the ball, where Jamie had one arm around Katie’s deep violet tulle gown by none other than her good friend and go-to designer, Zac Posen. The designer captured a sweet video (via Instagram Stories) of the couple holding hands inside the event, which, by the way, prohibits the use of cell phones. 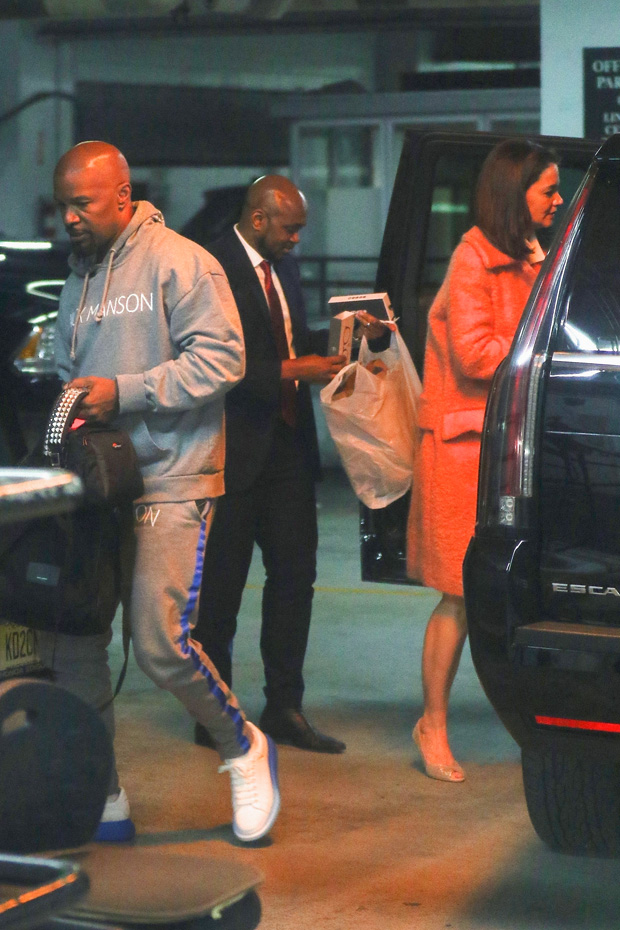 Jamie Foxx and Katie Holmes returning to his hotel in New York City on May 14, 2019. (Photo credit: BACKGRID)

Katie and Jamie have been in a very private relationship for the past six years. They were first linked in August 2013 when they were spotted dancing together in the Hamptons. It wasn’t until September of 2017 that the pair decided to go public with their romance.

Despite never verbally confirming their relationship, Katie and Jamie were photographed holding hands in Malibu that same year (2017), which marked the first time they stepped out in public as a couple since her split with Tom Cruise, 55. Katie and Tom were married for six years and have one daughter together, Suri, 13.