Cardi B, 26, shut down the pink carpet at the Met Gala in New York on May 6. The rapper wore a custom red dress with a feathered train that took over the carpet. Cardi’s look featured a feathered head piece that covered her hair entirely. — Just her hands and face were visible on the pink carpet. The Grammy winner stayed true to her red color scheme with a matching lip and eyes. See her full look, below!

HollywoodLife previously reported about Cardi’s excitement over this year’s Met, particularly the over the top theme — Camp: Notes on Fashion (a term for “extra”). While Cardi kept the details about her red carpet look a secret ahead of tonight, our insider previously teased that the “Money” rapper would bring her fashion A-game to the Met. “Cardi knows how to make an entrance, and the Met Gala of all things will be a big fashion moment for her,” the insider shared. And, Cardi did not disappoint.

Cardi attended the Met Gala in 2018, as the guest of designer Jeremy Scott. He created a custom Moschino gown for the rapper, who was pregnant with her first child, Kulture Kiari Cephus, at the time. Cardi came through drippin’ in pearls for her Met Gala debut last year. — A complete 180 from this year’s red ensemble. In 2018, Cardi wore a plunging, pearl-embellished gown that matched Jeremy’s suit of the exact style. The duo’s looks aligned perfectly with the theme of “Catholic Imagination.” This marks the second year Cardi’s nailed the annual event’s respective theme. 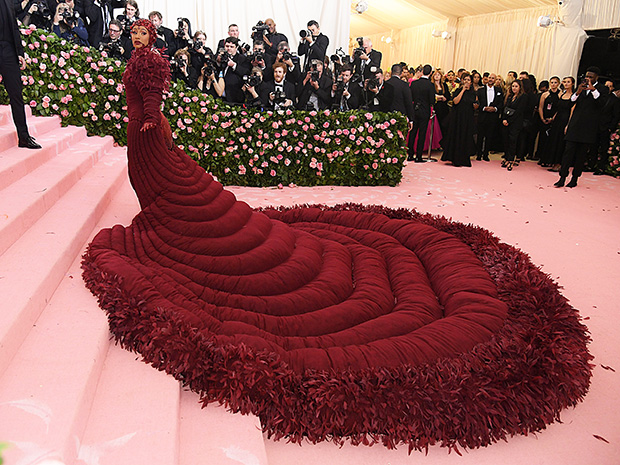 Cardi B at the Met Gala at the Metropolitan Museum of Art in New York City on Monday, May 6, 2019. (Photo credit: REX/Shutterstock) 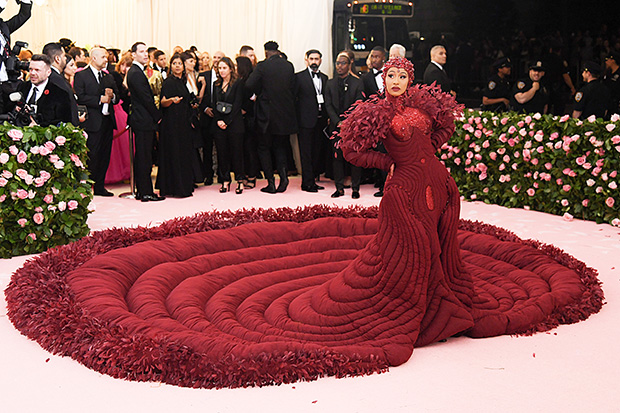 Cardi B at the Met Gala at the Metropolitan Museum of Art in New York City on Monday, May 6, 2019. (Photo credit: REX/Shutterstock)

Cardi’s red carpet moment at the Met came after she confessed that she underwent cosmetic breast surgery after giving birth to her daughter in July 2018. “I just got my boobs redone,” the “I Like It” rapper told Entertainment Tonight during an interview, while on the set of her latest campaign photo shoot with Fashion Nova. “I feel good,” she said, explaining, “But, then sometimes I feel like not, you know? [When] your skin is stretched out.”

The mother of one is fresh off her big night at the Billboard Music Awards, which took place in Las Vegas (the home of her new residency) on May 1. Cardi took home two BBMAs — Top Rap Female Artist and Top Hot 100 Song (Maroon 5 ft. Cardi B “Girls Like You”) — out of her whopping 21 nominations.