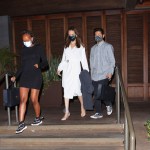 Angelina Jolie stepped out for a bite to eat in Los Angeles with her 15-year-old son, Pax Jolie-Pitt on May 4, and she looked incredible in a figure-flattering outfit that proved she’s embracing the hot weather.

Angelina Jolie, 43, was all smiles when she headed out to lunch at Cecconi’s in Los Angeles, CA on May 4, and her 15-year-old son Pax may have something to do with it. The mother-of-six looked amazing while strutting her stuff in a black lace tank top and matching black leather pants during the outing, and she was happily joined by Pax, who wore a casual white t-shirt, gray jeans and a black beanie. Angelina’s summery look helped to show off her back tattoos as she added shades to her style and if she wasn’t a huge movie star, she would have looked just like any other mother happily spending the afternoon with her teenage son!

Angelina and Pax’s lunch outing comes after the award-winning actress was recently seen out and about with her daughter, Vivienne, 10. They also stepped out in Los Angeles for a shopping trip on April 28, and Angelina looked just as gorgeous as she did on her outing with Pax. The only difference was that she dressed a little bit warmer for her trip with Vivienne and donned a long black coat.

Pax and Vivienne are two of six children Angelina shares with ex-husband, Brad Pitt, 55. The gorgeous gal has also been seen out and about with the others, including Maddox, 17, Zahara, 14, Shiloh, 12, and Knox, 10, and although she’s now a single parent, she definitely makes it work. Angelina and Brad are in the process of officially finalizing their divorce after splitting up in Sept. 2016 but a judge recently granted them legal single status. Brad also shares custody of all six children with Angelina.

It’s always great to see Angelina looking happy and enjoying time with her kids. She constantly reminds us that she’s a mom first and an actress second, and we love her for it!