Cardi B and Offset, 26, just stole the show before the show. The “Money” rapper, 26, owned the red carpet at the 2019 Billboard Music Awards on Wednesday night. The couple hit the red carpet and instantly gave the paparazzi a picture-worthy moment to say the least. The hip hop couple shared a… sweet… kiss, or lick on the red carpet before the posed for photos. Cardi grabbed Offset’s face and appeared to be one who started the PDA moment. But, the Migos rapper made up for it when he grabbed Cardi’s leg and dipped her for an epic photo op.

Cardi put her six-pack abs on display just 10 months after giving birth to her daughter, Kulture Kiari Cephus in July 2018. Instead of a traditional mini dress, she opted for a sultry, two-piece ensemble. — A yellow crystal embellished halter top with matching ruched skirt from MOSCHINO by Jeremy Scott. Meanwhile, Offset looked dapper in an all black tux with diamonds and a pair of silver glasses as his accessories.

And, don’t get any ideas about accusing the rapper of plastic surgery when it comes to her six pack. Cardi’s abs are the real deal. She snapped back quickly after giving birth to her daughter. When Cardi went back to work after taking time away to focus on motherhood, she started to show off her incredible post-baby body. And, while the “Bardigang” was thrilled to see their girl in amazing shape after baby, she was hit with accusations of getting liposuction — to the point where she had to address the speculation. Cardi took to social media in October 2018, where she denied surgically enhancing her stomach, and admitted that she was actually having a hard time gaining weight. 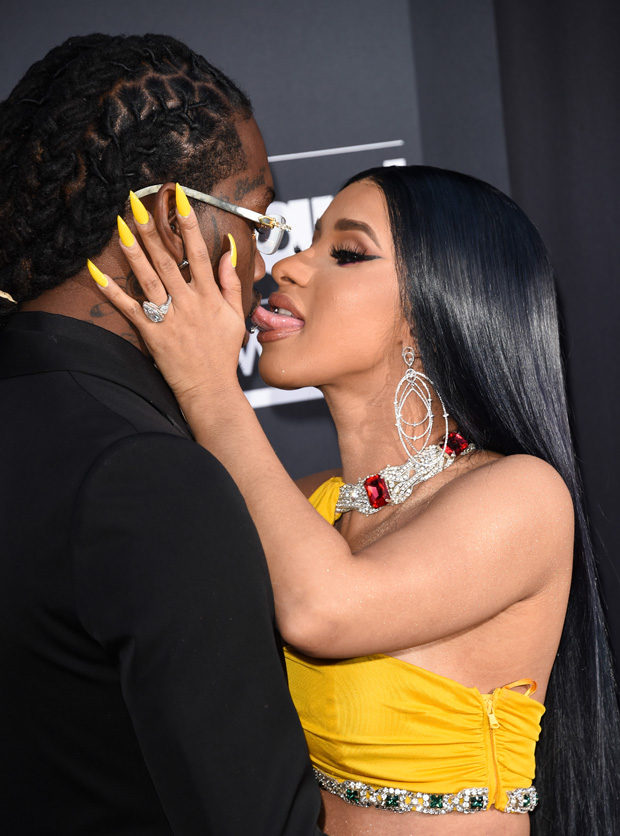 Cardi B licks Offset on the red carpet at the Billboard Music Awards in Las Vegas on Wednesday, May 1, 2019. (Photo credit: Shutterstock) 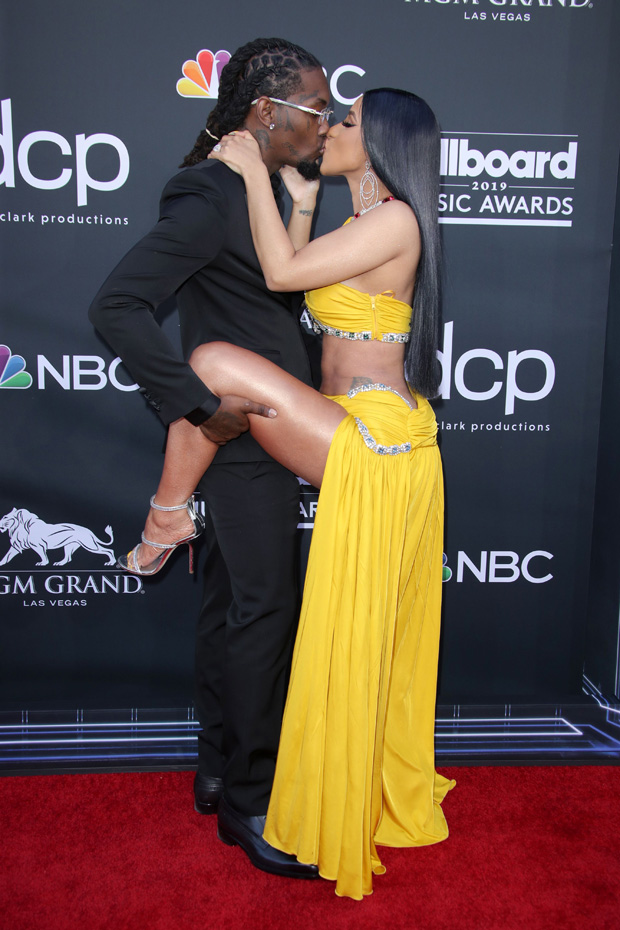 Cardi B and Offset kiss on the red carpet at the Billboard Music Awards in Las Vegas on Wednesday, May 1, 2019. (Photo credit: Shutterstock)

It’s a big night for Cardi. The rapper leads the nomination with 21 (in 18 categories), including Top Artist, Top Female Artist, Top Rap Album, and Top Rap Artist. And, it’s safe to say that the odds are in Cardi’s favor, seeing as she’s actually competing against herself in certain categories. What does that mean? — Cardi is nominated twice in three categories: Top Hot 100 song, Top Selling Song, and Top Collaboration. So, there’s a pretty good chance she’ll walk away with some hardware tonight. Cardi walked away with one Billboard Award at last year’s show for Rap Female Artist. She was nominated for seven.

Cardi’s epic red carpet moment at the BBMAs came after recent confession that she underwent breast cosmetic surgery sometime after giving birth to her daughter last July. “I just got my boobs redone,” the “I Like It” rapper told Entertainment Tonight during an interview, while on the set of her latest campaign photo shoot with Fashion Nova. “I feel good,” she said, explaining, “But, then sometimes I feel like not, you know? [When] your skin is stretched out.”

Cardi and Offset were able to squeeze in a date night at the BBMAs in the midst of their busy work schedules. Cardi has a new collection with Fashion Nova (her second with the brand), that will officially drop on May 8. She’s been busy designing pieces of the 100+ collection while juggling her Las Vegas residency at the newly opened Kaos day club and nightclub at the Palms Casino and Resort.