Brooke Burke was as gorgeous as ever when she co-hosted a private dinner on April 29, while celebrating the Nautica Malibu Triathlon and benefitting Children’s Hospital Los Angeles. Brooke, who recently wowed the world with a stunning nude pic on Instagram, continues to prove that age is just a number. The TV host-turned-fitness mogul has four kids — Shaya Braven Charvet, Heaven Rain Charvet, Neriah Fisher, and Sierra Sky Fisher. And back in 2012, she battled thyroid cancer and won. Now, at 47, she’s single — she and Baywatch babe David Charvet split in 2018 — and she’s in the best shape of her life. So, what are the secrets to her ageless beauty?

“I intermittent fast, so I don’t eat breakfast,” Brooke revealed EXCLUSIVELY to HollywoodLife. “I’ll wake up and do coffee or a black tea. Sometimes I do bulletproof coffee, where I’ll put in the butter and the heavy cream, which I think is really good. We need fat, it’s all the things that we were trained not to do that really feed our brain and our skin, our hair. I  do eat a lot of fat but I am pretty conscious of what I eat, I don’t eat processed food really at all. I intermittent fast faithfully but I’m not like 16 hours strict, it really depends, but I start with the coffee and then after I finish my workout I usually have a really good shake that’s full of everything I need from almond milk to good collagen protein, it will probably have some MCT oil in there, some dates, some macca energy, pretty much all the good stuff and that sustains me for a while. So I’ll do that nearly every day.”

Intermittent fasting is a diet that was used as far back as the early 1900’s to treat disorders like diabetes and epilepsy. It’s enjoying a resurgence in popularity in the past few years and while there are a number of versions of the diet, the basic concept is the same: Eat pretty much whatever you want, but only during a specific time period. Some devotees of the diet only eat within an 8-to10-hour period every day and then fast the remaining 14 to 16 hours. There is also a version known as the 16:8 Method where you restrict eating to only eight hours in the middle of the day and fast for the remaining 16 hours. On both options you can eat whatever you want with no calorie restrictions.

Not only does Brooke not count calories, she also revealed to us that she doesn’t banish carbohydrates either. But she emphasized that most of the time she is “mindful” about the food she eats. “I’m not afraid of rice. No. I try not to eat a lot of saturated food and packaged food like junky stuff but look at the Asian culture. I’m not mad at rice, and I’m not that obsessed either. I give myself room so everything is in moderation.” 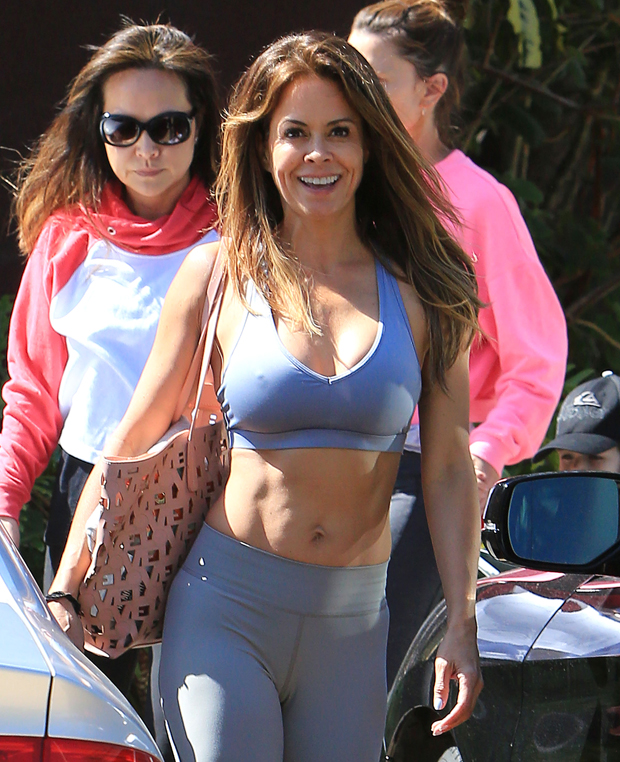 “But intermittent fasting that will save you. When I went to Italy I ate pizza and pasta and drank wine. But I was intermittent fasting so I didn’t gain a pound. I ate what I wanted but I didn’t hit the buffet for breakfast. Simple rules with intermittent fasting that allow you to eat anything you want to eat. It’s crazy. I used to make five meals a day and I would never go more than two to four hours without eating. That was my whole philosophy for 20 years as a young model, and I’m in better shape now than when I was then.”

Brooke may have eaten nothing but pizza and pasta on her Italian holiday but she typically eats much cleaner. “I have a lot of soup, I eat meat, I eat a lot of fish. Sometimes I just do a shake and then I eat a really good dinner. It depends on my schedule but when you are intermittent fasting life gets really simple because you are really only doing two meals a day and if I need to snack, I snack, but I kind of eat consciously, so I’ll do fish, lean protein a lot of soups, lots of vegetables, I love spicy food, avocados, olive oil, a lot of nuts. I eat a lot of macadamia nuts, which are super fatty. I always have a little snack packs in my car. A typical dinner could be a filet mignon, a salad and grilled vegetables. I eat a lot of sushi. I love Mexican food.”

Brooke hasn’t looked back since she “switched over” to intermittent fasting two years ago, but that’s not her only fit tip. “For me it’s all about sleep, happiness and hydration.  I drink water all the time, I have water in my car, water by my bed, water bottle in my purse, always. I just think that we need it. I drink a scoop of fat burning lemonade every morning when I work out. I put it in my water bottle.  And I work out smarter and harder than ever before in less amount of time.”

If you want to try one of Brooke’s workouts you’re in luck, because she’s got her own app — called Brooke Burke Body — with tons of follow along routines that you can do right at home. “I started my fitness app a year and a half ago. You can do 10 minute workouts, which I know sounds silly but you can really do 10, 15 minute, 20 minute work outs, you can decide what you want to do and you work out intense, you get an after burn. The days you go into the gym spending an hour in there, for me are long gone. I feel like I am in better shape in my 40s than I was before. It is just understanding the body. I might do even less than a half hour workout but it is more intense, it’s targeting the problem areas. Toning, sculpting, lifting, I have booty burn, I have light work outs, I know how to carve my body, I know how to tone the tummy and hard rock the core and so I put all these programs together on my app, and you get it done at home, and it is really inexpensive $9.99 a month. You try it for free for a week. You can do it at home. So no more excuses, time is not an excuse anymore.”

Another thing Brooke makes time for in her life — charity. A longtime supporter of the Nautical Malibu Triathlon, Brooke revealed that she loves watching, but would never be able to take on the grueling race. “I don’t compete, but I am a local here. Malibu is my home, so it is amazing to be able to come together and support and of course kicking this off to raise some money for the Children’s Hospital, which is amazing. I have the utmost respect for people who compete but I could never, but I’m here to support, and it is nice to see friends come together and raise money and awareness for such an important cause.” If you want to donate to the Nautica Malibu Triathlon,  and Children’s Hospital Los Angeles, please visit www.CHLA.org/NMTKickoff. The Nautica Malibu Triathlon that is slated to take place at Zuma Beach on September 13-15, 2019.