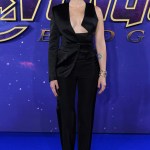 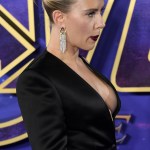 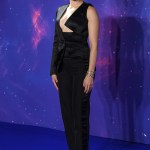 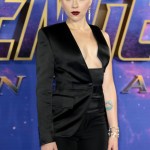 Scarlett Johansson wore a ‘blue’ carpet outfit worth five infinity stones at the fan screening for the new ‘Avengers’ film. The asymmetrical design was quite complex and therefore at major risk of an accidental slip.

Scarlett Johansson, 34, takes on all kinds of risks as Black Widow, like teaming up with the Avengers to battle Thanos. Once again, she put herself in possible jeopardy — of a nip slip. Although it’s not quite similar to the end of the world, the possible wardrobe malfunction would’ve certainly made the blue carpet stand still at the Avengers: Endgame fan screening in London on Wednesday night, April 10. The MCU star wore a silky black Tom Ford ensemble that had a lot going on in the top half — one side was a blazer, the other a vest, and just about nothing in the middle.

It must’ve took strategic taping skills to keep her cleavage from wandering astray. We applaud Scarlett’s experimental look, which was actually Tom Ford’s “cotton silk duchesse cut out bustier,” a one-armed blazer and trousers all paired together to look like a jumpsuit. The actress swept up her blonde hair into a bun, highlighting the unique ensemble even more. Her finishing touches were a bold magenta lip and dangling gold-knotted earrings.

Scarlett’s fellow Avengers — we mean, co-stars — also dressed to the nines for the UK screening. In lieu of the classic black tuxedo, both Chris Hemsworth (Thor) and Paul Rudd (Ant-Man) opted for plaid and checked suits.

Avengers: Endgame doesn’t hit theaters until April 26, and the wait for the three hour superhero film has been agonizing for many fans. Pre-sale tickets went on sale on April 2, and just after the first week of sales, Fandango tweeted that it sold “5x the number of tickets” compared to the last Avengers flick, Infinity War. This will be Scarlett’s fourth Avengers movie, and her solo Marvel movie — Black Widow — will reportedly start filming in the summer of 2019.