Jordyn Woods‘ post-Tristan Thompson drama transformation was going so well until she experienced a wardrobe malfunction on Tuesday night in London. The model accidentally flashed her nude Spanx underneath a tight, blue mini dress while arriving at the Jin Bow Law Skybar for the launch party of her Eylure X Jordyn Woods lash collaboration on March 26. See her fashion mishap, below.

Despite her undergarments making an unexpected appearance, Jordyn played it cool as she made her way out of a black vehicle. The star of the party looked stunning in her long-sleeve ensemble, which featured neon orange outlines throughout, that matched her open-toe transparent heels. Jordyn also debuted a new do’ — long platinum blonde hair to the root, which was down and straight.

“Quick switch up for launch day,” she captioned a pre-party photo in her hotel, referencing her new hair. Her icy blonde locks came as a surprise, seeing as she recently cut her brunette hair into a bob nearly three weeks ago. Jordyn appeared to be in great spirits despite the after-math of her cheating scandal with Thompson, 28, that caused the fall-out of her relationship with the entire Kardashian family. Not to mention, the scandal, where she and Thompson shared a kiss at a party in LA back in February, also cost Jordyn her Kylie Cosmetics and Good American jobs — two brands of the K-fam owned by Kylie Jenner, 21, and Khloe Kardashian, 34, the mother of Thompson’s daughter, True, who will turn one on April 12. 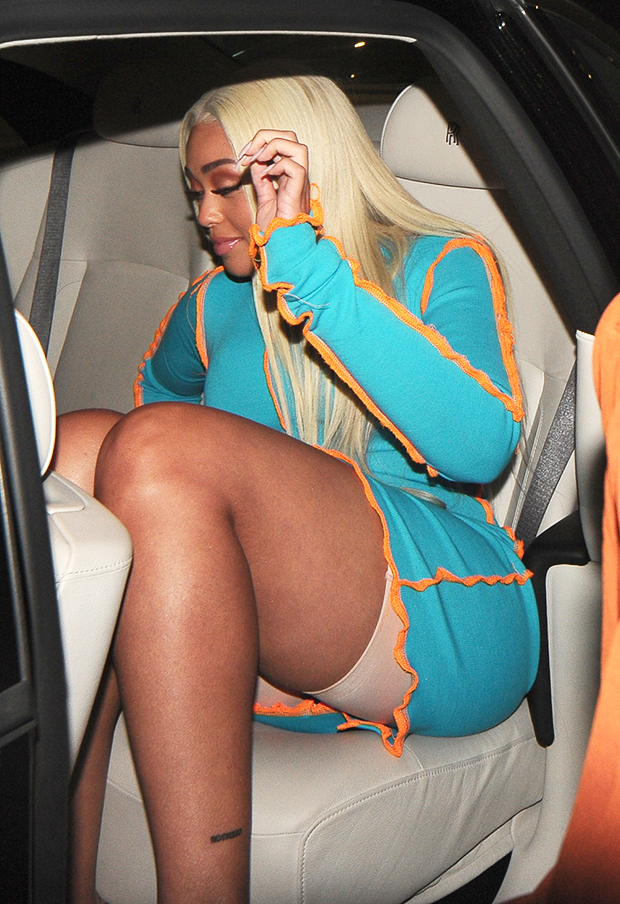 Jordyn’s been parading around London the past two days ahead of her launch party, with her mother Elizabeth right by her side. The model is nailing her post-scandal makeover, despite her admission that the backlash from her Thompson-Khloe drama effected her, along with her family.