Justin Bieber has NO time for haters! After the singer posted a gorgeous photo of his wife, Hailey Baldwin, on Instagram March 25, he took notice of one harsh fan comment. “You are NOT in love with Hailey!” the person, whose Instagram handle is @jaileyisajoke, wrote. “You only married her to get back at SG plus Hailey sleeps with men like @shawnmendes for fame and she’s racist.” WHOA! Of course, the ‘SG’ reference is for Justin’s ex, Selena Gomez, who he dated on and off for years before officially getting together with Hailey in June 2018. He was dating Selena just months before that, although they ended things at the beginning of March.

The Biebs did NOT take kindly to someone dissing his marriage, and he fired back in a big way. “A logical person doesn’t talk or think this way,” Justin wrote. “U should be ashamed of yourself really. I absolutely loved and love Selena. She will always hold a place in my heart, but I am head over heals [sic] in love with my wife and she is absolutely the BEST THING that has ever happened to me period.” Justin revealed that he’s seen MANY comments like this on his Instagram page recently, and vowed that he’ll never respond to another one again. However, he wanted to make a point to stick up for his wife.

“This is a reply to all immature sick people who send Hailey hurtful messages like “he always goes back to Selena” or “Selena is better for him,”” Justin continued. “YOU HAVE NO IDEA MY LIFE AND WHAT’S GOOD FOR M!! Hailey is my Bride period. If you don’t like that or support that, that means you don’t support me. You’re not a fan or a good person. If you were raised right your parents would have said…if you don’t have something nice to say don’t say anything.” 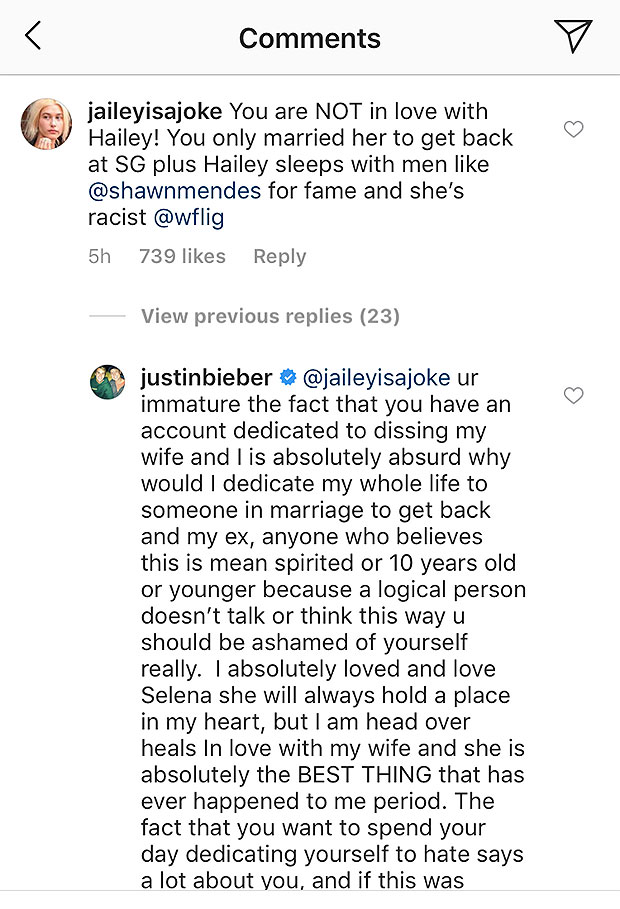 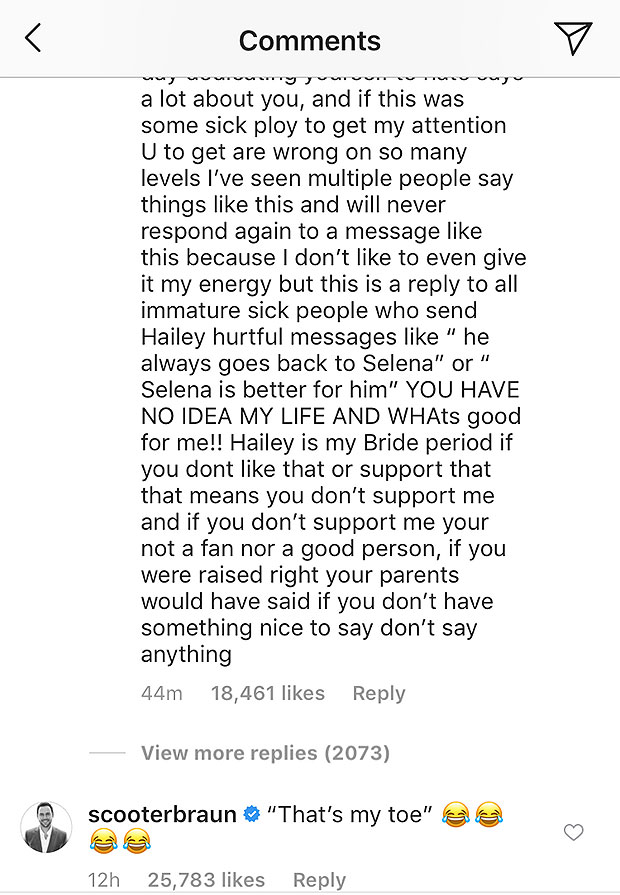 His message was quickly flooded with thousands of people sending him their support and cheering him on for telling off the critics. Justin has recently been open on Instagram about “struggles” he’s been facing, and just hours before posting this message about Selena, he told fans that he was putting off work on a new album to focus on his marriage and family. Justin and Hailey were married in Sept. 2018 in New York City.