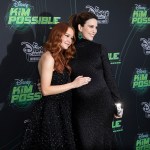 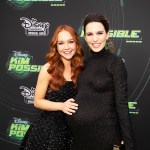 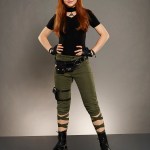 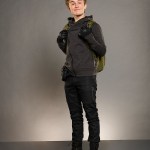 The Kim Possible live-action Disney Channel Original Movie is one of the most highly-anticipated TV movie events of the year! The DCOM airs Feb. 15 at 8 p.m. on Disney Channel. HollywoodLife spoke EXCLUSIVELY with the original voice of Kim Possible, Christy Carlson Romano, about Sadie Stanley taking on the iconic role in the live-action movie. “I have watched Sadie become Kim Possible,” Christy told HollywoodLife at the movie’s press junket. “I think it’s safe to say that it’s been a transformation. It’s one of her first jobs and it’s so fresh, and she has such an amazing energy. I feel so blessed to see her at the beginning of her career because I think even after Kim Possible that Sadie is going to do really amazing things.”

Christy loves that 17-year-old is bringing a “youthfulness” to the role like she did when the animated series premiered in 2002. She revealed what makes Sadie the the perfect choice for Kim. “I think it’s that fresh energy. I think it’s that youthfulness that Kim kind of needs,” Christy continued. “Because, when I played Kim, I was 16. I was age appropriate, and it made a lot of sense because had they hired somebody who was somebody sounding like a teenager, the energy just would have been different. A lot of times they [the writers] were asking me questions like, ‘Hey, how would you say ‘what’s up’ in a modern way?'” And I said, ‘Oh, you know, what’s the sitch?'” And that became one of Kim’s taglines. I think it’s a collaborative thing. Art is an ongoing collaboration, and I think with Sadie’s interpretation of KP it’s just a continuation of that.”

The animated Kim Possible ran from 2002 until 2007. The show remains beloved by fans today. “Kim Possible is a timeless story of friendship and helping people. It’s a really positive message for families to sit down and watch together… You could sit down and watch it together. I can’t tell you how many fans have told me that they used to watch this with their grandfather before he passed, or they used to watch it with their sister and their brother, and they have these amazing memories of sharing this together with someone else, and I think it’s going to be the same for now. The older generations are going to show it to newer generations, and they’re going to share it.”

While Christy isn’t playing Kim in the live-action reboot, she will be making an appearance! She’ll be playing a character named Poppy Blu! As for whether or not she’d return to the role of KP, Christy said, “Obviously, if it was a cartoon, I would be more than honored to come back to be the cartoon. But now it’s live-action, and we dont know what the next steps are for that. I’m supportive in any way.”