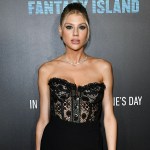 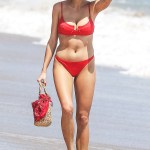 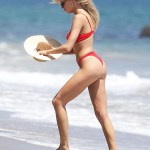 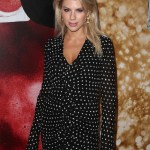 Nurse, get us water, quick — Charlotte McKinney’s latest bikini look is extra fire! The ‘Baywatch’ star flaunted her toned abs in a candy stripe bikini that she designed herself.

Candy stripes aren’t just for the hospital! Charlotte McKinney, 25, rocked the pattern by the pool in a red and white striped bikini from GUESS, as part of her partnership with the brand for its Spring/Summer 2019 swimwear capsule, ICON. Charlotte’s the “face and designer” of the upcoming collection, dropping in March 2019, as GUESS’ press release announced on Feb. 4. It explained that she played an “instrumental role in the design and creation” of the swimwear, and we can tell! Just look at the bikini below — it was practically made to emphasize how amazing Charlotte’s body is.

From the Baywatch star’s toned curves to her gorgeous face, it’s no wonder she was the first model GUESS handpicked from Instagram in 2014. The blonde beauty even thanked the brand for launching her career at just 17 years old in Monday’s press release. “It’s been such an honor to create, design and shoot for the iconic brand that we know as GUESS. I owe a lot of my career success to GUESS, it was my first big modeling job and a truly unforgettable experience,” she wrote. “It’s such a beautiful feeling to be part of the GUESS family, to have shot several campaigns over the years, and now to create my own capsule collection is a dream come true.” Charlotte then revealed she designed 12 bikinis — but the set below is her favorite!

“My favorite swimsuit is the white and red stripe top and Brazilian bottom,” the model told Marie Claire in an interview published Feb. 4. “It’s the ultimate classic bikini. You could wear it this year or in 20 years, and it will never go out of style.” Yes, it’s a timeless look, with an added benefit — high-cut brazillian bottoms are especially hot right now!

We love seeing Charlotte’s career take off, especially as she segues into TV and film. After competing on Season 20 of Dancing with the Stars, the model is now starring in the remake of Fantasy Island, which began filming in Fiji this January and stars Michael Rooker, Parisa-Fitz Henley and Austin Stowell.