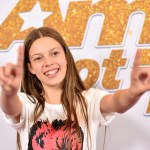 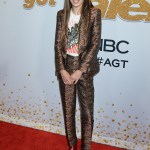 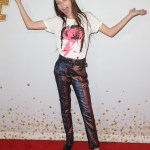 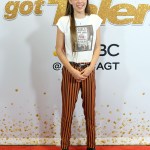 The Brit starlet commanded the stage on ‘America’s Got Talent’ & now is joining the superstar roster over at Simon Cowell’s record label! Catch our EXCLUSIVE interview with the budding star!

At 14-years-old, Courtney Hadwin has already had the kind of success most singers only dream of. After landing fans nationwide following her appearance on America’s Got Talent, the starlet inked herself a record deal with none other than Simon Cowell! The singer has signed a long-term recording contract with Syco Music, and there are surely more angst-filled rock & roll performances ahead for the star! The Hartlepool, England native has a bright future ahead, especially given that Simon is also the man who sent former Fifth Harmony member Camila Cabello, and former One Direction member Louis Tomlinson skyrocketing to fame following their own music competition show stints. Courtney was an instant ‘AGT’ show favorite, and to date – her audition performance alone has been viewed over 250 million times! HL caught up with the newly signed singer to talk her big 2019 plans ahead, ‘AGT’ show memories, and her obsession with A Star is Born!

When you look ahead at your career trajectory, is there a specific musician that you would like to follow in the footsteps of?

Probably people like Tina Turner, Pink and The Rolling Stones as they put everything into their studio and live performances. Their songs don’t sound like everyone else’s and their songs stand out as well. I’d obviously love to sell out tours like them too and to have a career as long as theirs.

What was your favorite moment from ‘AGT’?

I don’t have just one favorite moment from AGT, it’s more like a few. Getting the golden buzzer from Howie was one of them, as I never expected to get on the show let alone get the golden buzzer, so that was like a dream come true. Going through on the public vote in the quarter finals was amazing as it was only the second time that I performed on AGT, and I didn’t know if the public would vote for me so I was so happy and grateful when they did. To be honest though, every part of AGT was a moment that I will never forget.

Would you go back and change anything if you could?

I don’t think I would change anything, I feel like I did everything that I wanted to do in the show and I had lots of fun doing it.

Congrats on signing to Syco Music & Arista Records! How did it feel when you first found out you had landed a record deal?

Thank you so much! When I first found out I was just blown away, like how could this happen to me? It just didn’t feel real and I am so so grateful for this opportunity.

Who’s on your personal playlist these days?

Little Richard, The Rolling Stones, and after watching A Star Is Born I’ve become a little obsessed with the soundtrack.

When was the first moment you knew you wanted to be a singer?

I’ve always sang, I even sing in my sleep, but the moment I thought I want to do that was when I saw Connie Talbot singing somewhere over the rainbow on Britain’s Got Talent.

Is it hard balancing “normal” life as a teen now that you’re in the spotlight?

No not really, I’ve always sang every day and my life has always been singing so nothing has really changed!

You have such a mature sound for your age, where does that influence come from?

I listen to a lot of different artists from Little Richard to Janis Joplin and I think that influences me a bit but I also just try and feel the music and put my own voice to a song.

In 2019, I am so excited to be able to release my own music and to work on an album. Hopefully, there will be some performances on some big stages in there as well.