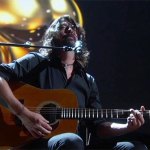 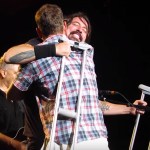 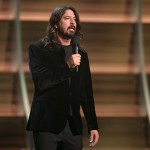 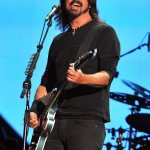 Dave Grohl, what are you doing, dude? The Foo Fighters frontman rocked a little too hard in Las Vegas, as he took a tumble off the stage after throwing back a cold one!

“Dave Grohl: likes Bud Light, hates gravity,” wrote Instagram user @I_Play_With_Cars, who uploaded a video of Dave, 49, playing with the Foo Fighters at The Joint at Hard Rock Hotel in Las Vegas as part of CES 2109, according to Consequence Of Sound. While playing a guitar solo, the former Nirvana drummer sauntered over to the side of the stage near the bar. It seems Dave was thirsty, as he asked for a beer. After trying to take a hands-free drink, which resulted in him spilling the drink, Dave shrugged and chugged. After putting away the beer, he tried to get back up on the stage – but fell off!

In a blink of an eye, fans were suddenly transported back to 2015, when Dave broke his leg after falling off the stage during a concert in Gothenburg, Sweden. Thankfully, it seemed as if Dave was a-okay after this scary tumble, as he got back up on stage and rejoined the band. It’s also good that Dave didn’t short circuit the speaker when the beer spilled. The band gave a shout out to JBL audio on Instagram afterward, so it seems all’s good with the Foos. Though, you’d think that by now, Dave would have ‘learned to fly,’ right?

The last way the Foo Fighters want to start off 2019 is by having a repeat of that 2015 fall. “Hey, ladies and gentlemen,” Dave said back then after crashing off the stage. “I love you, but I think I just broke my leg. I really broke my leg.” Dave, after the medical team attended to him, said he had to go to the hospital before promising that he and the band would come back and finish the show.

He wasn’t lying. The Foo Fighters went through a series of covers with drummer Taylor Hawkins singing before Dave returned! “I may not be able to walk or run,” he said after given a chair to sit on, “but I can still play guitar and scream!” The band had to cancel a string of European dates to give him a chance to heal up, but when they returned, Dave (with his busted leg) arrived on a giant light-up throne that looked like a Guitar Center had a baby with the Iron Throne from Game of Thrones.

When the band returned to Gothenburg in 2018, Dave poked fun at his fan while giving the fans a scare. He dressed a stuntman to look like him, per Louder Sound, and the doppelganger took a fall headlong into the pit. After pranking the audience, Dave came out to join the band and rock out.

It’s good Dave’s in one piece because the Foo Fighters have a huge 2019 lined up. They’ll play Reading and Leeds, Sonic Temple, Hurricane & Southside, and Lollapalooza’s inaugural event in Stockholm, Sweden.