The tanning critics don’t faze Teresa Giudice, who just showed off her extremely bronzed skin while on vacation in Jamaica after Christmas! HollywoodLife has learned that she loves a good spray tan and the confidence it gives her!

Teresa Giudice, 46, loves the skin she’s in! The Real Housewives of New Jersey star showed off her darkest bronzed look yet over New Year’s while vacationing in Jamaica with family. But, a simple bikini photo turned into a tanning intervention and bash session from fans online who claim she’s gone too far with tanning — whether it’s spray or from the sun. To the critics’ dismay, Teresa isn’t fazed by the bronze backlash.

“She has always been into tanning — a lot of beds and some spray — even doing endorsements for local [New] Jersey companies over the years,” a source close to the Bravo star tells HollywoodLife EXCLUSIVELY! “Teresa gets spray tans at least a couple of times a week and never skips appointments. She doesn’t think she looks too tan.”

The RHONJ veteran has always loved being tan, not to mention, her olive skin tone comes from her Italian roots. “Teresa has always been obsessed with looking young and hot,” the insider says, adding that being tan helps her to feel that way. And, the obsession only heightened when she was in prison. Teresa was released from federal prison in Connecticut in December 2015, after serving nearly a year behind bars for fraud charges. “She got even more into her looks and fitness while away in prison and started working out multiple times there. That’s when she decided to change her lifestyle completely when she got out.” After completing her sentence, Teresa made fitness a mandatory part of her life. 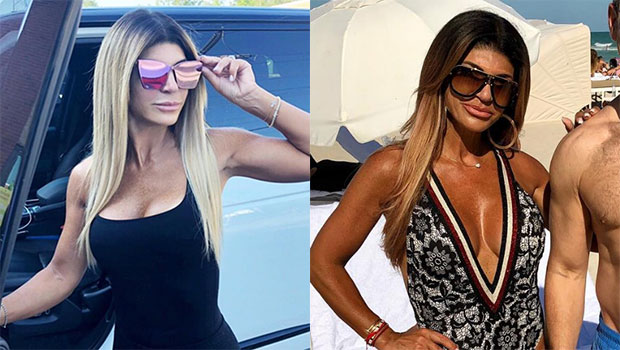 The Real Housewives of New Jersey star is mother of daughters Gia, 17, Gabriella, 14, Milania, 13, and Audrina, 9.

Since her husband, Joe Giudice, 46, is now serving his prison sentence, “she wants to look her best for when he comes out,” the source says. “Joe has even lost a lot of weight in jail and hits the gym. He thinks Teresa looks really hot. And, Teresa could care less what anyone else but Joe thinks.” In March 2016, began a more than three-year federal prison sentence (after being indicted, along with Teresa), on fraud charges. A judge later ordered him to be deported to Italy after his sentence is complete.

Because fans were so concerned over Teresa’s darker glow, we decided to call in an expert. Brittney Bennett, owner of Be Bronze Spray Tan in West Hollywood, weighed in on the specifics of Teresa’s new tan after seeing her controversial photo (above right). “The tan that Teresa gets is called a comp tan,” Bennett tells us. “It’s a spray tan, about 3-4 coats and then a comp tan coat goes on top of the tan. She tans at least every 7 days and that dark, dark color washes off immediately. I think it’s a competition spray tan. She has a dark Italian skin tone anyway and then a comp tan on top is insane!”