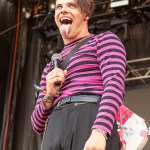 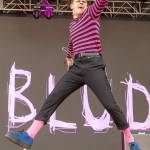 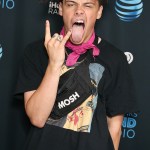 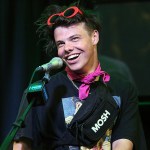 Halsey’s got a new man! The singer posted her own PDA photo of herself walking down the streets of London with Yungblud, who wrapped his arm around her! Are they official? Who is he? — Here’s everything we know about him!

Halsey, 24, and Yungblud, 20, continue to stir up dating rumors with her latest Instagram photo, which showed him with his arm around her during a sweet stroll in London! While the new romance is still in its early stages, Halsey fans are all over it. But, who is Yungblud? — That’s the common question buzzing around the internet. Here’s five facts about him as their relationship heats up!

1. Yungblud is a 20-year-old English alternative rock musician. — Yungblud, whose real name is Dominic Harrison, is a Doncaster native in South Yorkshire, England. He studied theatre at Arts Educational Schools, London before starting his music career at age 16. It wasn’t until 2017 that his music would gain major popularity. After the success of his hit, “I Love You, Will You Marry Me” — a based on a true love story of a man and a woman — he dropped his debut album, 21st Century Liability on July 6, 2018. While he is typically categorized as a rock musician, Yungblud’s music also touches upon everything from hard rock to hip-hop and reggae.

2. He’s described his music as a “socially conscious artist unafraid of delivering genre-bending protest songs.” — “As a kid I always so enthralled and excited by rebellion,” he recalled during an interview with Drive‘s Gen and Lewis. “I always spoke my mind and that was a result of the music I listened to growing up. I think right now for young people it’s such a confusing world to live in and there’s so much going on politically and it just baffles me that nobody’s talking about it in pop music, outright. That’s something I want to do.” Yungblud’s style has also been described as “the spitfire suburban poetry of younger Arctic Monkeys and Jamie T, fused with a healthy touch of ska and hip-hop spirit.”

3. If you watch Netflix’s wildly popular series, 13 Reasons Why, then you’ve probably heard his music. — Yungblud collaborated with Charlotte Lawrence on the song “Falling Skies”, which is featured on the season two soundtrack of 13 Reasons Why.

4. Yungblud is known for his musical abilities. — Not only does he sing and writes his own songs, he also plays the guitar, piano, drums and bass.

5. He came from a family of musicians. — Yungblud’s father was a vintage guitar dealer and his grandfather played with T. Rex.