Paulina Gretzky’s holiday style is sizzling hot! The model looked stunning in a red, plaid mini, as she posed for a sweet family photo with fiancé, Dustin Johnson and their two sons, River, 1, and Tatum 3, on Christmas!

Paulina Gretzky, 30, looked stunning, per usual, on Christmas Day! She posed for a family photo with fiancé, Dustin Johnson, 34, and their two sons, River, 1, and Tatum, 3, where she showed off her toned legs in a plaid mini skirt. The fashion forward mom paired the sultry skirt with a black long-sleeve top and matching thigh-high boots. See her full look below!

The model, who just celebrated her 30th birthday in Aspen, wore her blonde hair down with loose waves. And, as you may have noticed in the holiday snap, Gretzky’s contour was a work of art. Her bronzed cheeks really accented her high bone structure. Meanwhile, her pro golfer fiancé suited up in a cream-colored jacket and light blue collared shirt. He wore navy blue pants and brown shoes.

The couple’s sons were a bit more dressed down and looked cute and comfortable in their outfits. River wore a dark button-up shirt and jeans. Tatum sported a white sweatshirt that said, “Palm Beach” on it, and dark pants and sneakers. Gretzky also shared snaps from their Christmas Day celebrations on her IG Story. — One photo of her with the kids in matching pajamas, and another of her with River, her “date” for the night. Johnson also shared photos of his two boys on Monday, writing, “So ready for Santa! #merrychristmas @paulinagretzky I love you!” 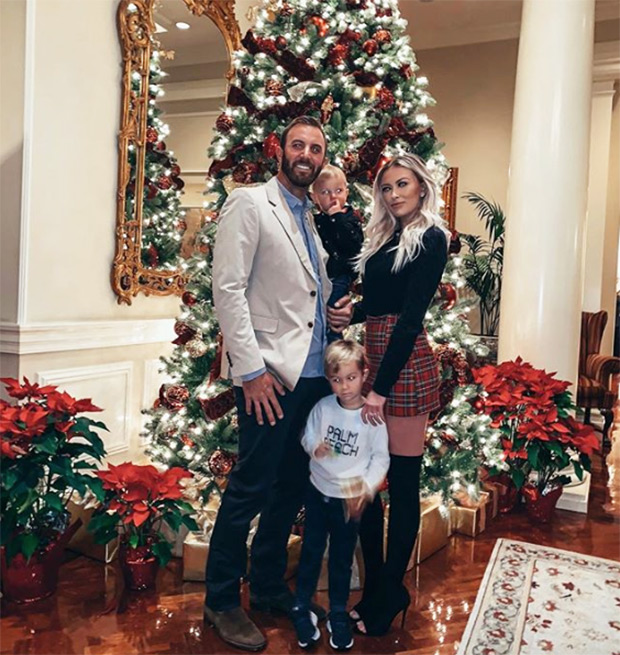 Paulina Gretzky, Dustin Johnson and their sons, River and Tatum pose by the Christmas tree on December 25, 2018.

The engaged couple looked happy during their holiday celebrations, despite going through a rough time earlier this year. Gretzky and Johnson were faced with rumors that he had cheated on her back in September, with a woman who allegedly belonged to the same country club as the couple. Gretzky later fueled the cheating speculation when she deleted all of her photos with Johnson on social media, September 10.

Johnson seemingly addressed the infidelity rumors on Twitter the next day. “Every relationship goes through its ups and downs, but most importantly we love each other very much and are committed to being a family. Thank you for your love and support,” he tweeted on September 11.

Gretzky and Johnson got engaged in 2013 after just seven months of dating. However, they’ve been taking their sweet time when it comes to hitting the alter. And, after five years of dating and two children later, we heard Gretzky’s hoping to say “I do” in 2019. “Paulina and Dustin have been engaged for five years, so naturally they get a lot of people asking them when the wedding is, especially now that his brother just got married. So far they still haven’t set a date, but Paulina’s saying it will happen in 2019,” a source close to the model told HollywoodLife EXCLUSIVELY.