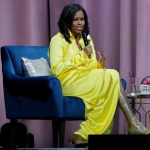 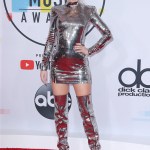 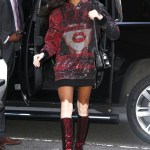 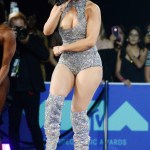 ‘Tis the season to wear disco balls on your feet! Check out HollywoodLife’s gallery of icons like Michelle Obama and more who drew attention on the stage, and on the streets, in their fun footwear.

Sequins are a hot trend this holiday season, as proven by the number of sparkly dresses and jumpsuits we’ve scoped as of late! Boots, especially in the thigh-high and knee-high category, have been hopping on the bandwagon. Former First Lady Michelle Obama, 54, especially shined in her glitzy pair of Balenciaga shoes that she wore to her book tour’s last stop at the Barclays Center in Brooklyn on Dec. 19. She promoted her best-selling memoir, “Becoming,” in thigh-high boots that clocked in at $4,000! The boots — a love child between holographic colors and glitter — even prompted Valerie Jarrett, former senior advisor to Barack Obama, to tweet, “Well, I have never seen boots like this before. Have you?” We have not…leave it to Michelle to lead the way, both in politics and footwear trends.

Taylor Swift’s shoes shined just as brightly at the 2018 American Music Awards in Los Angeles on Oct. 9. Her silver boots, designed by Balmain, were so shiny, we bet the photogs could see their reflections! The “Delicate” singer coordinated the silver panels on her feet with an identical dress by the same designer, which she also wore for her performance of “I Did Something Bad.” It was her first performance at an award show since Feb. 2016. She chose the appropriate ensemble for such an occasion!

Winnie Harlow, 24, also rocked boots that packed on the sequined panels! We experienced a flashback to a yellow brick road when we saw the ruby red material on the model’s shoes, which she wore to rehearsals for the Victoria’s Secret Fashion Show in New York City on Nov. 7. See matched in an oversized hoodie that was just as heavily-sequined, designed by Balmain…that brand really loves its sparkles!

Although we’ve been focusing on the taller cousins of boots, Camila Cabello, 21, showed that the glittery trend hasn’t skipped ankle booties. The “Havana” singer wore a stiletto-heeled pair, complete with silver sparkles, to the Q102’s iHeartRadio Jingle Ball in Philadelphia on Dec. 5. Before changing into her performance outfit, she complemented her festive boots with an Elf-themed Christmas onesie. We’re loving the fashion risks our favorite stars have been taking these past few weeks!