Like father, like son! Thanks to his grandma, Mason Disick is following in his father’s footsteps with a fancy new purchase. See the designer coat for yourself!

This nine-year-old has got some nice stuff! Mason Disick celebrated his birthday on Dec. 14, and Kris Jenner, 63, helped him ring in his new year with a new designer coat — specifically, a $3,000 one from Versace. He wore the gold, black and white hooded puffer coat while Christmas shopping with his grandma in Beverly Hills, pairing the new outwear purchase with a patterned shirt, black sweats and sneakers. And with Kris sporting a black-trimmed blazer that matched the rest of her glam outfit from her sunglasses down to her knee-high boots, the pair were kind of coordinating as they pounded the pavement. Too cute!

3,000 bucks is not a dollar amount to sniff at, but Mason is no stranger to designer duds — especially when it comes to matching his dad. The father/son pair has been twinning since Scott Disick and Kourtney Kardashian‘s oldest was just a little one. Most recently, the two wore matching bomber jackets while spending the day together. Maroon for Mason, black for his dad. And now that he has added this puffy coat to his wardrobe, it’s clear that the youngster is going to follow in his father’s stylish and expensive footsteps. Who knows, maybe Scott will pick up a Versace coat like this in his own size sometime soon?

But nice new outerwear isn’t the only way that Mason has celebrated his birthday this year. In fact, his mom threw him an epic Fornite party on Dec. 16. 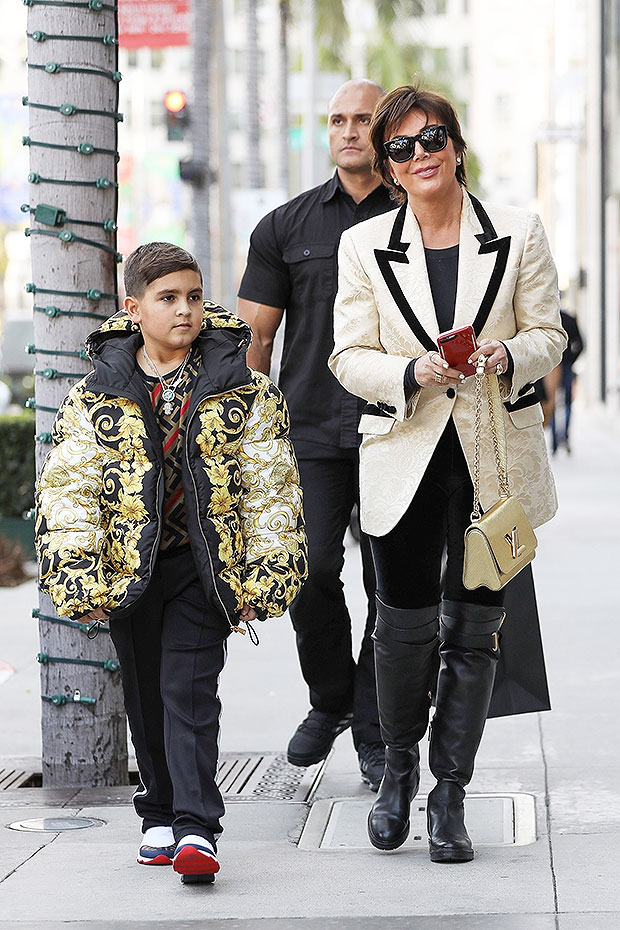 With giant screens for gaming, not to mention a famous 10-year-old DJ, Kris’s oldest grandkid celebrated in serious style. We have no idea how the famous fam will top that next year when Mason hits a milestone age. He’ll be 10 in 2019!