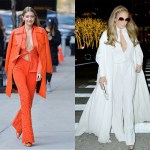 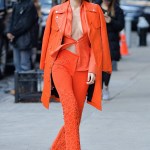 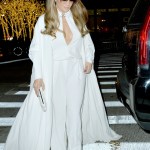 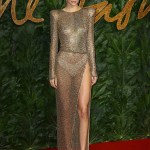 The cold never bothered them anyway! Gigi Hadid, JLo & more celebrities have been spotted braving the brisk winter air without bras on. See their daring looks!

Not wearing a bra is one of the greatest feelings, but there are some occasions where we’d typically prefer to wear one. Like, at the office, at the gym, or anywhere where the temperature has dropped below 45 degrees. However, there are a few brave celebs who don’t mind when things get a bit… nippy out. Gigi Hadid, Jennifer Lopez, and more stars have all been spotted this winter sans bra and TBH, the looks are so good that we’re reconsidering the whole bundling up our boobs thing.

Hadid was all smiles on Dec. 11 when she casually walked out in New York City (where it was about 30 degrees outside) wearing an orange top held together by a single button. The plunging neckline revealed that she was going braless, giving a whole new meaning to braving the cold. She paired the Ronald Van Der Kemp top with a matching leather coat and lace pants from the designer in the same bright hue.

Another model, Romee Strijd, also proved that she’s basically Elsa from Frozen when she shared an Instagram photo taken in NYC on Dec. 10 in which she sported a skintight white turtleneck top with nothing underneath. JLo also ditched her bra to rock a keyhole neckline white top for an appearance on the Tonight Show with Jimmy Fallon on Dec. 11.

But Manhattan isn’t the only chilly city where stars have stepped out braless. Miley Cyrus rocked a tight black turtleneck in London on Dec. 6, while Kendall Jenner attended the British Fashion Awards in the U.K. city in a naked dress on Dec. 10. Check out the gallery above to see all the best braless fashion from this winter!