‘Love and Hip Hop’ star Tommie Lee is fresh out of jail and just dropped a new track called ‘Truth.’ It caught Meek Mill’s attention and now he’s flirting with her online.

Love and Hip Hop: Atlanta star Tommie Lee just got out of jail after allegedly assaulting her daughter at her middle school. Either Meek Mill doesn’t know about her legal drama or doesn’t care cause he’s openly flirting with the 34-year-old as she released her rap track “Truth” on Dec. 14 and Meek, 31, is all over it. When she posted some bars from it on Instagram along with photos of her looking fierce, he hit her up with the comment “You really hot.”

Tommie — real name Atasha Jefferson — just got out of jail two days ago for allegedly slamming her daughter into a locker at her middle school. She posted a social media video on Dec. 12 where she said “I just want to say thank you to everyone who prayed for me, wrote me, sent me money that I did or didn’t need.” She also posted an Instagram pic with her lawyer Drew Findling while wearing a tiger print catsuit. She captioned the pic, “I promise you things will Be different @drewfindling. That’s my word!”

Both Tommie and Meek are in mourning as their mutual pal Chiko Juan was just killed in a triple shooting near Atlanta. On Dec. 13 Meek took to IG and posted video of his friend captioned “@chiko_juan you fought a long war with the streets I used to be scared for ya sometimes lol I’m sending my prayers to ya mom Rest in peace champ.” 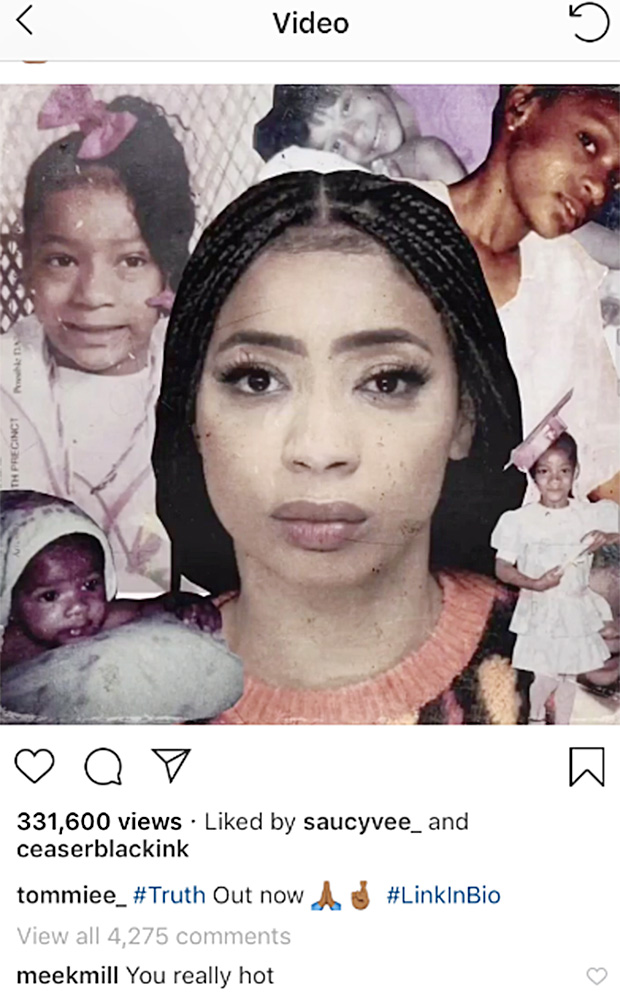 Tommie was more emotional, sobbing in an Instagram live video and saying “You gotta love these people while they’re here. All that fake ass sh*t, don’t call me. Don’t ask me. I’m never gonna be okay. The people that know me, know I’m not okay… I’m just letting y’all know, please, please just love on your people while they’re here.” New music, a dead friend, jail time, a flirtation from Meek…Tommie’s going through a lot right now.