Get ready to hail a new ‘king of Atlantis,’ as Jason Momoa’s young song looked exactly like the ‘Aquaman’ star. If that wasn’t uncanny enough, his daughter was like a clone of her mother, Lisa Bonet.

It’s amazing how genetics work, isn’t it? Jason Momoa, 39, was joined by his family at Aquaman’s Los Angeles premiere on Dec. 12, and it was as if everyone was seeing double. The man portraying the underwater DC superhero had his queen, Lisa Bonet, 51, by his side. Their two children – Lola Iolani, 11, and soon-to-be-10-year-old Nakoa-Wolf Manakauapo Namakaeha – were spitting images of their parents. Nakoa-Wolf looked like a clone of his father, down to the long hair, leather jacket and loose-fitting jeans. Lola was also a mini version of Lisa, as the two seemed as if they got dressed out of the same closet.

Though they wed in Oct. 2017, Jason and List have been together for nearly 15 years, as they started dating in 2005. Prior to this relationship, Lisa was married to Lenny Kravitz, 54, and the two had a daughter, Zoe Kravitz, 30, together. Lisa and Lenny have obviously remained on good terms since their breakup in 1993 because he and Jason seem to be the tightest of bros. Days before the LA Aquaman premiere, Jason uploaded a photo of him and Lenny wearing matching skull rings!

“I’m a huge fan of the artists I meet on Instagram love spreading the aloha,” Jason captioned the picture. “I got @lennykravitz a present made by @leroyswoodentattoos amazing bone skull ring. Check him out insta. Mahalo lenny for coming to support me on @nbcsnl aloha j” Has your current boyfriend/husband got your ex the bro equivalent of a friendship bracelet? If you said yes, you’re Lisa Bonet, as it’s quite unlikely that anyone else but Jason did such a thing. 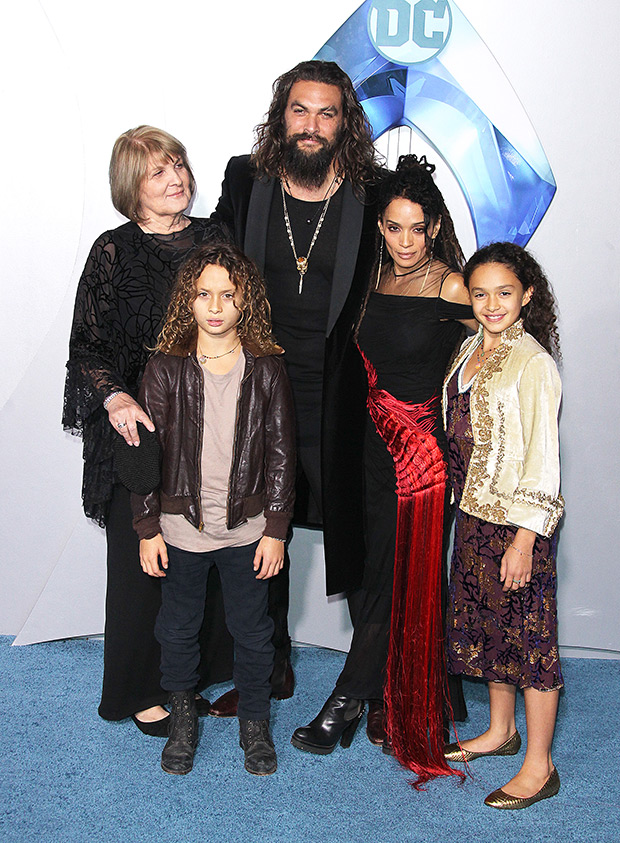 “What’s cool about Jason is that he’s an alpha male who stands for love and family,” Lisa said when speaking about her husband in March. “And to circle back to my own wounds, having an absent father, then to be fully met by a man of that stature, is really incredible. Jason embodies a rare form of masculinity in this day and age.” It might not be so rare anymore. We’ll see if Jason has passed these values down to his son and daughter the same way he passed on his genes.