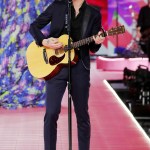 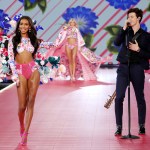 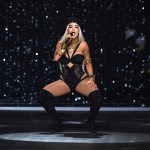 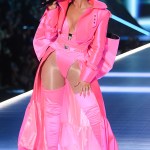 Well, Shawn Mendes is certainly a lucky dude! The singer was surrounded by gorgeous models as he sang his hit ‘Lost In Japan’ at the Victoria’s Secret Fashion Show, and it was quite an epic performance!

Shawn Mendes was one of several performers at this year’s Victoria’s Secret Fashion Show, and he absolutely killed it while jamming out to his new single, “Lost In Japan,” while strumming the guitar. The Canadian heartthrob performed during the Heritage segment of the show, during which several models strutted down the runway wearing very skimpy lingerie! Some of the models that walked during his performance were Gigi Hadid, Winnie Harlow, Josephine Skriver and Jasmine Tookes. Yeah, not a bad group to be hanging out with!

At one point during the performance, rookie VS model, Sofia Rovenstine, caught notice of Shawn as she was walking down the catwalk…and even blew him a kiss! It’s common for the performers and models to interact, but this flirty exchange definitely took things to the next level. Other performers at the show included Rita Ora, Bebe Rexha, Kelsea Ballerini, The Chainsmokers, The Struts and Halsey. Meanwhile, models like Kendall Jenner, Bella Hadid, Adriana Lima and more walked in the show.

The VS Fashion Show actually took place last month on Nov. 8, but didn’t air on television until tonight, Dec. 2. The show was taped twice, so producers could get the best footage possible to show the world!

It’s certainly been quite a year for Shawn, as he released his third studio album, Shawn Mendes, in May. The album went to No. 1 on the U.S. Billboard charts. Meanwhile, Shawn also took home the Artist of the Year award at this year’s Billboard Awards, as well as an American Music Award for Favorite Adult Contemporary Artist. In March, he’ll kick off his world tour in the Netherlands. The tour will take on Europe throughout March and April, then pick up again in North America in June for most of the summer!