Ariana Grande just dropped yet another teaser for her ‘Thank U, Next’ video and this time, she’s dressed in numerous Elle Woods looks from ‘Legally Blonde’! Are you freaking out? — We are! Watch it here!

Ariana Grande, 25, treated us all to a behind-the-scenes- supercut teaser from her forthcoming “Thank U, Next” music video! And, WE are so grateful for her! In the teaser, Ariana recreates iconic looks and scenes from Legally Blonde. She’s dressed as the film’s main character, Elle Woods in two separate scenes — one of her reading a law book with a dog (meant to represent Bruiser), and another in a car with two braids in her hair!

The singer even shared a behind-the-scenes moment with Legally Blonde’s Jennifer Coolidge, which has fans in their glory. The two appear to be in a nail salon, similar to the one in the film, with Coolidge dressed exactly like her character in the film! Ari and the actress share a sweet hug in the teaser, and we’re officially in our feelings.

And, the surprises didn’t end there! Ariana also referenced other classic teen movies in the teaser, including, Bring It On, 13 Going on 30, and, of course, Mean Girls. There’s even a 13 Going On 30 wedding scene in the video, which features Ariana as the bride. This is now the second teaser Ari has dropped this week, meaning, the highly anticipated music video is near! 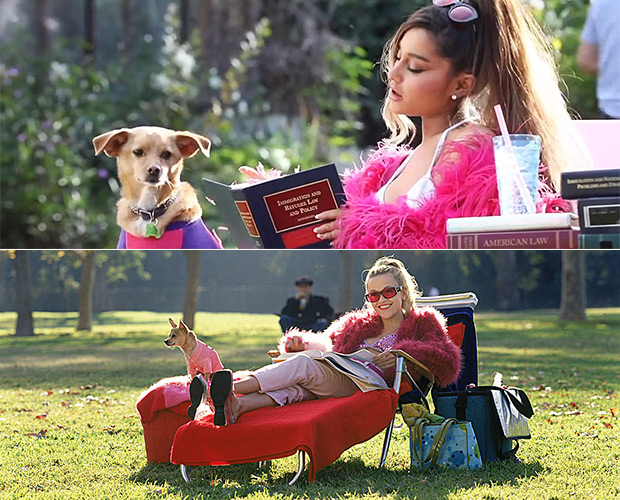 As you can see, fans have picked up on the movie parodies.

Ariana shared the first teaser for “Thank U, Next” on Monday, which featured parodied Mean Girls. Some of the film’s original stars, Jonathan Bennett and Stefanie Drummond, mad cameos, as well as musician Troye Sivan and YouTubers Colleen Ballinger and Gabi DeMartino. In the teaser, they recreated the iconic “Who is Regina George?” scene from the 2004 comedy. But, this time, instead of Regina, the gossip was all about Ariana.

Bennett appears to reprise his Mean Girls‘ role of Aaron Samuels by quoting one of the film’s most notable lines. “Ariana Grande told me my hair looked sexy pushed back,” he says, adding, “She’s not wrong!”

Ariana has yet to announce a date for the release of her “Thank U, Next” video. However, we have a feeling it’s just around the corner!