Now that they’re married, The Situation and his wife, Lauren Sorrentino, aren’t going to waste any time making babies. We caught up with the couple EXCLUSIVELY after their wedding to get the scoop on baby plans and more!

Mike “The Situation” Sorrentino and his new bride, Lauren Sorrentino, have been open about the fact that they want to start a family now that they’re married, and we got the EXCLUSIVE scoop straight from them about when that may happen. “We’ve been practicing all week,” Mike told HollywoodLife EXCLUSIVELY, just days after the pair’s Nov. 1 wedding. Lauren also added that she’s already tracking her ovulation so she can get pregnant as soon as possible.

“I’ve always used one of those apps,” Lauren admitted. “I think, as a woman, to take care of your body, and your health, and know what’s happening, I’ve always used one of those apps to track everything. So, now I’m using it to its full potential, to see when I’m ovulating and all that kind of stuff.” She said that she and Mike want to have kids “very soon,” and explained, “I’m one of four kids and so is mike, so we both grew up in these big, Italian families, where there was always noise in the house and chaos. We just kind of thrive on that. So, we always say we want to have at least three, but we’ll see what one is like!”

Mike and Lauren tied the knot on Nov. 1, to make sure they got married ahead of his upcoming prison sentence (CHECK OUT AN EXCLUSIVE WEDDING PHOTO BELOW). Mike was sentenced to eight months in prison earlier this year, and has to “surrender to the Bureau of Prisons no sooner than January 15, 2019.” He has not revealed his exact plans for when he intends to surrender just yet, but he added in our interview that he definitely wants to spend the holidays with his loved ones first. 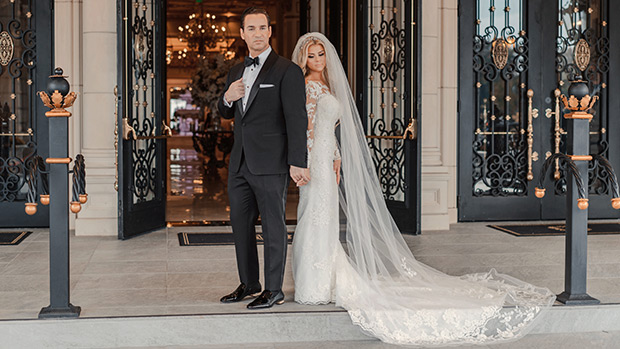 “Our plan is just to enjoy the holidays,” Mike explained. “We’re so excited. I mean, this wedding that just happened was so beautiful, and we’re just so happy to enjoy the holidays — Thanksgiving, Christmas, New Year’s, and Lauren’s birthday is the first week in January, so we get to spend all thos holidays together. We’re really on cloud nine right now.”

As for what’s looming 2019, Mike admitted that he and Lauren are “taking it one day at a time,” but are definitely most looking forward to having babies. “I believe that being married is a huge milestone, as well as having a family,” Mike said. “That’s very, very important. I’m old school, traditional Italian, where those are the most important things in your life. I’ve been on a lot of TV shows in the past ten years, and those are all accomplishments, but the biggest accomplishments are family and babies and marriage.”