Sailor Brinkley Cook, 20, wasn’t alive when Julia Roberts, 51, starred in Pretty Woman — so it’s extra impressive that she nailed the iconic look at a Halloween party on Oct. 28. Julie played Vivian Ward in the classic movie, released in 1990, and wore one memorable outfit in particular. With a shoulder-skimming blonde wig, a cutout blue and white dress, black thigh high boots and a red cardigan, Sailor looked just like Vivian while showing off her toned tummy. She shared a pic of her perfect costume to Instagram with the caption, “Baby, i’m going to treat ya so nice you’re never gonna wanna let me go.” So even if she wasn’t born until after Pretty Woman‘s release, it’s clear Christie Brinkley‘s daughter has seen the flick!

With such a strong start to HalloWeekend, we can’t wait to see what else Sailor has up her sleeves! Who knows, maybe she’ll even dress up in a couples costume with her boyfriend on Oct. 31? She and surfer Balaram Stack, 26, were spotted for the first time in June, holding hands on their way to a romantic dinner date. They look great together, and to make their relationship even more adorable, the model’s mom totally approves! In fact, Balaram has even appeared on Christie’s Instagram multiple times. While Sailor hasn’t made anything social media official yet, Halloween would be the perfect time to do that, right?

Whatever the case, this Pretty Woman outfit is stunning and Sailor is setting the bar high for herself! 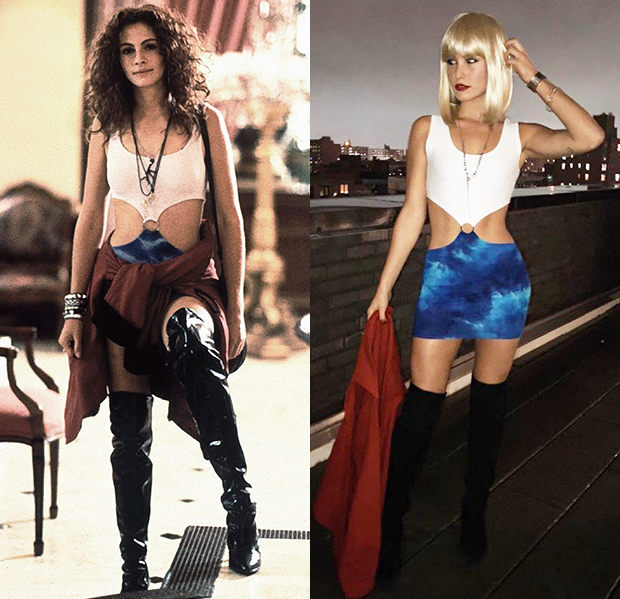 She isn’t the only star to try this look on for size, though. Who could forget the year Emma Roberts, 27, sported an identical cutout dress? They both nailed it. Who’s up next?

Related: Julia Roberts’ Husband: Everything to Know About Daniel Moder & Their 19-Year Marriage