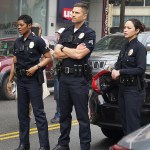 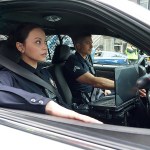 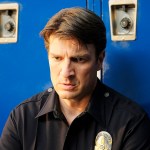 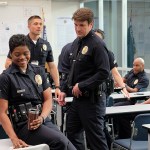 Nolan’s back on the job and ready to fight more crime. During the Oct. 23 episode of ‘The Rookie,’ Nolan finds himself in seriously dangerous situations.

Nolan and Bishop are on the road when the Oct. 23 episode of The Rookie kicks off. The person they’re chasing turns out to a bride who is trying to kill herself. Her fiancé cheated on her with her cousin, and now the girl thinks she has nothing to live for. She’s ready to jump off the “O” of the Hollywood sign. Nolan hands her his lottery ticket and says that she now has something to live for. Nolan admits he was married, and he used to buy lottery tickets during the bad times. Nolan’s giving this girl the hope she needs. Unfortunately, she slips and falls off the sign. She survives, thanks to Nolan.

Nolan and Chen are still seeing each other in secret, despite Bishop’s warning. They take the same sick day and think no one will notice. They vow to be extra sneaky. The next day, Bishop asks Chen if she’s ended things with Nolan yet. Chen doesn’t give her a straight answer. Bishop tells her that if she wants to “sabotage” her career before it starts, that’s on her now. Later, Chen tells Nolan she wants to keep things casual. She’s starting to think about what Bishop’s told her…

Lopez and West are asked to see the chief regarding the shooting. The chief is curious about why West didn’t fire any shots when pursuing the suspect from the last episode. Lopez covers for West because she doesn’t want to mess up her future. To teach him a lesson, they take all the high risk calls. Their first call is about a man destroying a church while high on PCP. West passes this test with flying colors and a little bit of water. During another call, West encounters a suspect while going to the bathroom. They get into a nasty fight, but West prevails.

While Bradford recovers from his gunshot wound, Chen gets a temporary training officer. Wrigley is about as lazy as they come. Chen barely gets any action during the day. Bradford goes to check on her, and he pushes her to respond to a call on her own. At the end of the episode, Bradford admits he deliberately assigned Chen to Wrigley. Everything is a test with this guy!

Bishop and Nolan respond to a car fire at a local park. A woman on meth lit it on fire after her drug dealer jipped her. She casually mentions she stabbed a kid while talking with Bishop and Nolan. Nolan finds the knife with the blood still wet. By the time they find the kid, he’s dead. The sergeant is still really tough on Nolan when he gets back to the station, and Bishop even tries to defend him.

While heading out on their next call, Nolan hits a girl with his car. Turns out, she’s run away from her kidnapper! Even though she’s been drugged up, the girl mentions the name Emma. Nolan and Bishop later encounter the kidnapper while investigating. Nolan nearly gets shot trying to save Emma. He goes after the kidnapper and gets him. Nolan starts punching the kidnapper, and Bishop has to pull him back. In the final moments, Nolan goes back to see the young girl in the hospital to tell her about Emma. His superiors may be telling him to leave his old ways behind, but his instincts are true and good.