For the past 20 years, Britney Spears, 36, has been mesmerizing us with the sexy outfits she wears on stage! From her “Slave 4 U” days to announcing her new Las Vegas residency, “Domination”, on Oct. 18, Britney has never disappointed. Case and point — while in Sin City on Thursday evening, the newly-appointed “Queen Of Vegas” emerged on stage wearing a sexy black minidress with star cutouts on the side. The cutouts were actually outlined with rhinestones and had metallic fringe dripping down her legs — and get this… the dress, made by Death By Dolls, costs $1,520! Pretty expensive for the average person, but for Britney, that’s probably very inexpensive. Either way, Britney looked amazing. Especially because she went commando in the sexy dress and looked hotter than ever!

And obviously, this isn’t the only time Britney has looked amazing on stage. Let’s not forget about all the onstage costumes that have come before this one. For instance, Britney wore a sexy green cocktail dress at Michael Jackson’s 30th anniversary show at Madison Square Garden in 2001, and she looked amazing! It was sparkly and oh so fancy. And speaking of fancy, Britney’s outfits during her 2009 Circus tour were out of this world! For the album’s title song, she wore a ringmaster costume while rocking lioness curls, and it was to die for. 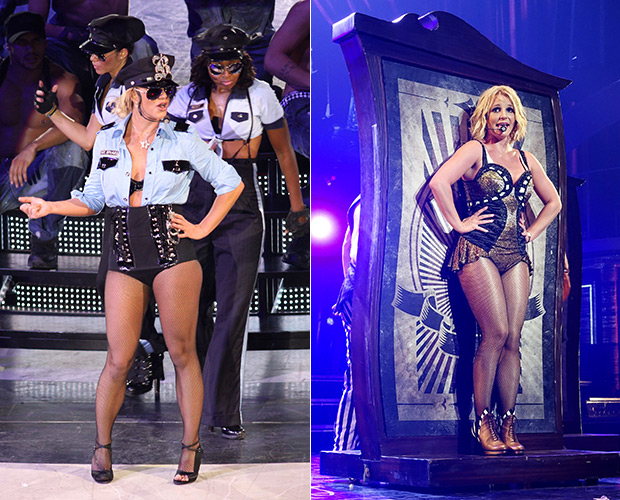 More recently, during the 2016 Billboard Music Awards, Britney wore what looked to be an outfit from the Victoria’s Secret Fashion Show. It was a sequin bikini accessorized with fur and chains! Sexy, right? And then during her first Vegas residency, “Piece Of Me”, she wore a number of outstanding looks! But our favorite of all-time? Probably when Britney wore a Madonna-inspired wedding dress during 2003 MTV Video Music Awards… when she also locked lips with the “Like A Virgin” hitmaker. Ah, the memories.

To see more of Britney’s most iconic concert looks, click through our gallery above!