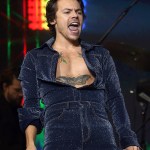 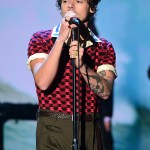 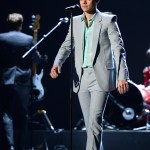 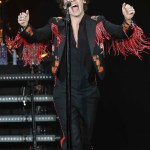 Harry Styles was photographed throwing in a few punches in some behind-the-scenes photos from his tour and fans are going nuts! See the pics of Harry boxing!

Harry Styles just boxed his way (further) into his fans’ hearts. The former One Direction member, 24, was photographed boxing during his tour this past summer by Philip Macias and the photos were just released online. Naturally, images of Harry throwing in a few punches backstage at The Forum stirred up some emotions amongst his fans on Twitter, because, well, he’s hot.

In the images, Harry can be seen wearing a white t-shirt with his name and tour details on it, paired with some shorts. He’s also got the full boxing glove set up going on. The photos started a Twitter trend, which fan @stylesscreature pointed out with a screenshot. ““boxer harry” is literally TRENDING ,,, that is the impact harry has when he’s boxing,” the user wrote.

Another fan pointed out just why these photos are so important. “Harry boxing is such a strange concept to me bc he’s like so soft and cuddly but then like BOOM he’s so strong and powerful and out here punching people f**k he’s hot,” wrote @flowerfeasths.

“boxer harry” is literally TRENDING ,,, that is the impact harry has when he’s boxing pic.twitter.com/KzaNNpqWKp

As of right now, a video of the boxing session hasn’t been released yet, but fans know what would happen if it was ever posted. “Harry’s boxing video would be the last nail in everyone coffin,” @zayniac_oned wrote.

Harry Styles Live on Tour- Behind the Scenes. (2)
Photography by Philip Macias pic.twitter.com/GiPaDKBnTm

Harry’s tour ended in July, but he has a pretty sweet gig lined up for 2019. Along with Lady Gaga and Serena Williams, the “Sign of the Times” singer will be co-hosting the Met Gala in May. The Metropolitan Museum of Art announced that next year’s theme is “Camp: Notes on Fashion” and we already can’t wait to see what Harry, Gaga and Serena wear to the iconic event.